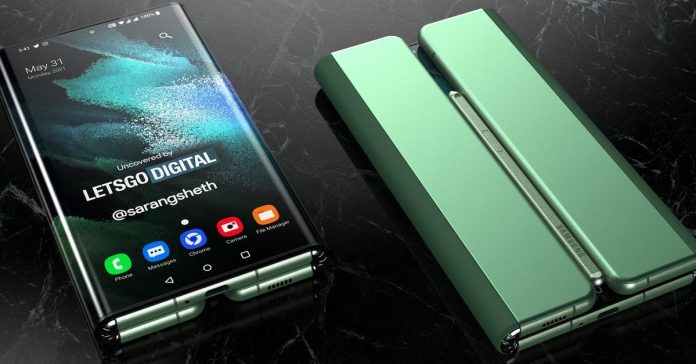 What will the smartphone look like in the future? Samsung has something in development that can be used not only as a phone but also as a tablet. The new device is more advanced than the company’s previous folding devices.

Samsung wants to continue to drive the development of foldable smartphones. In the patent application, you can already see what could soon await us as a finished device. Samsung wants to build a smartphone that folds in two places. Similar to the Galaxy Fold, the new device should be able to be used as a smartphone and tablet. LetsGoDigital now visualizes what this could look like.

If you fold the sides back, the tablet becomes a smartphone. When opened, you’ll have a really large screen and it will replace your regular tablet. Basically, Samsung can do without the second screen on the outside, as it has been used so far, only used one large foldable screen. Ultimately, this will give you much more room for productive work.

That’s why Samsung also wants to incorporate stylus support. While the S Pen doesn’t slide into the device, it does slip off its back between the folded screens. Another idea works similarly, with the S Pen fitting into a slit between the back.

Samsung has other ideas

Samsung not only wants to create foldable smartphones, but also phones with which the screen can be retracted. The possibilities are not yet exhausted, and Samsung is one of the few companies that not only has crazy ideas, but also implements them. Many foldable mobile phones are expected this year. The show is scheduled to take place in the fall. It remains to be seen if the dual foldable smartphone will be a part of it. Patents don’t always have to end with real products.