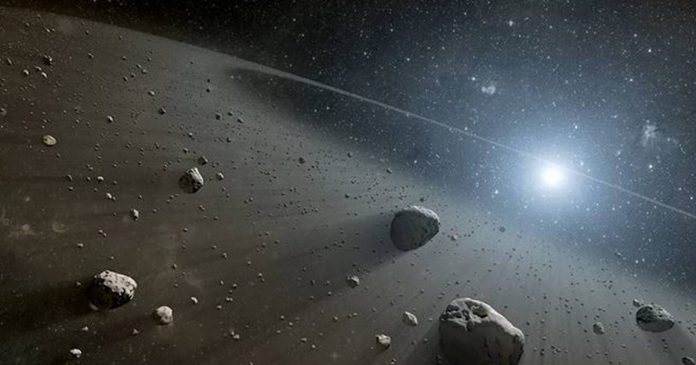 The material in the asteroids that helped form Earth could have formed far away in the early solar system and then brought there through random mixing processes.

Earth is believed to have formed partly from carbonaceous meteorites, which are believed to have come from asteroids in the outer main belt. Telescopic observations of the outer main belt asteroids reveal a common reflection feature of 3.1 μm indicating that their outer layers contain water ice or ammonia clay, or both, which are stable only at extremely low temperatures. Interestingly, although many evidence suggests that carbonaceous meteorites derive from these asteroids, meteorites recovered on Earth generally lack this feature. The asteroid belt raises many questions for astronomers and planetary scientists.

A new study led by researchers at the Earth Life Sciences Institute (ELSI) at the Tokyo Institute of Technology suggests that this asteroid material may have formed far in the early Solar System and then transported to the inner Solar System through mixing processes. anarchism.

In this study, a combination of asteroid observations using the Japanese AKARI Space Telescope and theoretical modeling of chemical reactions in asteroids indicates that surface minerals in outer main belt asteroids, especially ammonia-bearing mud (NH3), are formed from starting materials containing NH3 and dioxide ice. Carbon is only stable at very low temperatures and in conditions rich in water.

Based on these findings, this new study suggests that outer main belt asteroids formed in distant orbits and differentiated to form different minerals in the water-rich mantle and rock-dominated cores, the Tokyo Institute of Technology said in a statement.

To understand the origin of the discrepancies in the measured spectra of carbonaceous meteorites and asteroids, using computer simulations, the team modeled the chemical evolution of several plausible primitive mixtures designed to simulate primordial asteroid material. They then used these computer models to produce simulated reflection spectra for comparison with those obtained telescopically.

Their models indicated that to match the spectra of asteroids, the starting material must contain a large amount of water and ammonia, a relatively low abundance of carbon dioxide, and react at temperatures below 70 °C, indicating that the asteroids formed far from their source. . Current locations in the early solar system.

If true, then this study suggests that the Earth’s composition and unique properties are caused by strange aspects in the formation of the solar system.

Decades of work on the James Webb Space Telescope. What...