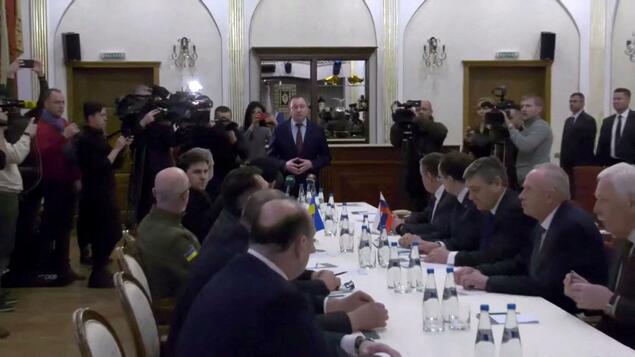 The peace talks between Russia and Ukraine ended without a hitch. “We are returning to the capital for consultation,” Ukraine’s adviser Mikhail Podoliyak told reporters after a meeting on the Belarusian – Ukrainian border on Monday. He did not give details. Both sides have identified a number of key issues that need to be addressed in “some decisions”. The meeting lasted more than five hours. The Ukrainian delegation returned to Kiev in the evening.

According to the Interfax agency, the head of the Russian delegation Vladimir Medinsky said: “First, we agreed to continue the negotiation process. The next meeting will take place in the coming days on the Polish-Belarusian border. ” Until then, the delegates will consult with their “heads of state.”

Russia’s foreign policy chief Leonid Slutsky says Russia wants to create a situation within 24 hours. The date and time for the next round of talks will then be determined.

In a brief statement, Bodolyak underscored Kiev’s goal of negotiations: “The main goal is to stop the firing and fighting in the territory of Ukraine.”

More about the Russian invasion of Ukraine:

Meanwhile, Ukrainian Defense Minister Resnikov announced a general amnesty and money for Russian soldiers who voluntarily lay down their arms. “Those who do not want to die as murderers can save yourself,” he explained on social media.

The Russian delegation was led by the Kremlin’s special envoy Medinsky. David Arakamiya, head of the presidential faction, led the Ukrainian side.