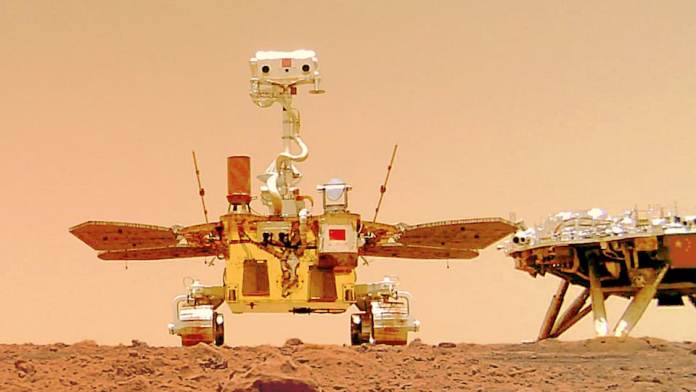 Take a small photo of Zhurong, the Chinese rover that crosses Mars. The remote-controlled robot took a selfie next to its landing pad.

A real pride for the designers of the Chinese Space Agency (CNSA), who immediately posted the result on Twitter. You can see Zhurong – whose name means “god of fire” in Chinese mythology – spreading his solar panels like wings. The detachable camera allowed him to take the picture. Two more are directly integrated into it, and they look like the eyes in the photo.

Family photo! The first batch of scientific photos of # zurong Landing rover unveiled on Mars. Figure 1 was captured by a wireless camera deployed by the rover. Figure 3 shows the effects of the rover maneuver. Full size HD images and Easter eggs revealed by Tweet embed at https://t.co/jCzeJVk5iD pic.twitter.com/j7sFT39M45

CNSA completed this thumbnail shot with other photos taken by Zhurong. First, one of its exploration areas, Utopia Planitia, is a vast red and stone Martian plain. The third image shows the Zhurong landing platform displaying the Chinese flag. We can also see signs of the robot’s wheels: “China’s footprint” on Mars, says CNSA. As for the HD panorama, it corresponds to the back of Zhurong, while he was still on his platform.

The Zhurong rover landed on Mars on May 15, after traveling for nearly a year. He now has three months to travel across the red planet and gather information. Like Perseverance, a NASA robot, Zhurong is responsible for soil analysis. It should also provide more data about the Martian atmosphere, and map the planet.

Big ambitions for an already historic mission: Zhurong is the first unmanned robot that China has managed to send to Mars. It thus becomes the second country to achieve this feat, after the United States.

Currently, there are three rovers operating on Mars: Zurong, the Chinese rover, Perseverance, the American rover that landed on Mars in February, and Curiosity, also of America, which has been on the Red Planet since 2012.

Scientists develop the most detailed map of the universe in three...

Users have reported an outage in the messaging app, and Signal...