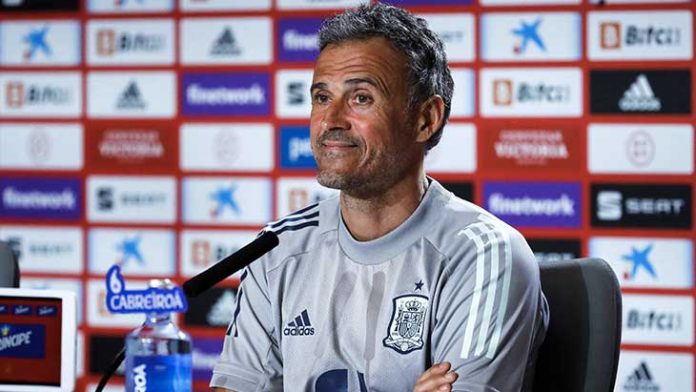 A week before the start of the European Football Championship, Spain and Portugal face off in a friendly exhibition match this Friday at 7:30 pm at the Wanda Metropolitano in Madrid. A crowd not only on the W9 but also on the Daily Mercado by clicking here.

For this match against Portugal, Spain coach Luis Enrique will have to stay on the net with Robert Sanchez 4-3-3. The Brighton goalkeeper will be defended from the right by a guard consisting of Marcos Lorent, Eric Garcia, Aymeric Laporte and Jordi Alba. In the middle, Sergio Baskets will attend as a sentinel, backed by Coke and Petrie, with Danny Olmo, Alvaro Morata and Pablo Sarabia forming the attacking trio.

For his part, Portuguese coach Fernando Santos missed Gonolo Quito in favor of Covit-19, while Joao Moutinho returned to the team after a muscle warning. Rui Patricio will start in the cages of Portugal, with four-way defense in front of him by Nelson Semedo, Pepe, Jose Fonte and Rafael Guerrero, right to left.

In the remaining starting line-up, the national press is divided: Joao Palhinha and Sergio Olivera find a double center record in midfield, ahead of two of the four attackers: Renault Sanchez, Andre Silva, Cristiano Ronaldo and Joa Felix. For his part, O’Donoghue sees a three-man midfield with Danilo and William Carvalho, while Renault Sanchez will form at a high level dedicated to working ahead of Joa Felix, Cristiano Ronaldo and Diego Jotta as playmakers.

See also  When and how does it proceed?

“Pack your star”: Solidarity rally with musician Gill Affirm after the...