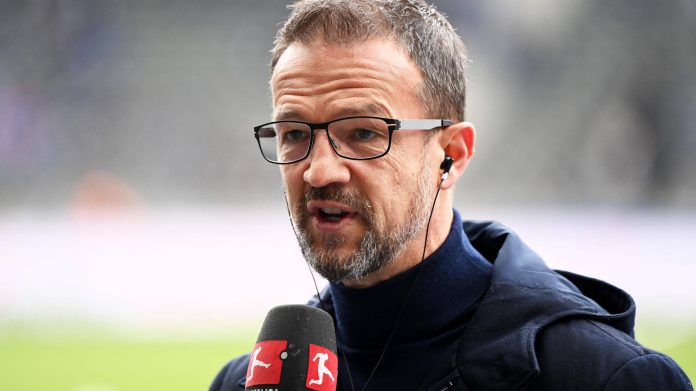 Hertha BSC officials were very unhappy after their third derby defeat of the season. Managing Director Freddy Bobic was also upset after the 4-1 loss to Al Ittihad.

1:4 applause at home to a full house in front of Union Berlin, the third derby defeat of the season and a stay in 17th place, thus the first direct relegation place in the Bundesliga: Saturday night’s match was used for Berlin Hertha, who was still so far. He has served good with a great defeat.

It is significant that Berlin’s only goal came from a special goal by the guests (Baumgartel, 49th place). The old lady’s efforts to attack seemed harmless and incomprehensible. The contender from Köpenick was so outperformed that the Berlin Olympic Stadium ran out completely and ultimately the deserved winner. Substitute goalkeeper Marcel Lutka showed normalcy that evening and prevented an even bigger deficit in the first round.

While Union now gets a taste of international business like last year, the nerve-wracking relegation battle remains on Hertha’s agenda. Managing Director Freddy Bubeck, who sounded visibly angry at Sky’s mic after the end of the game, noted that nerves were on edge.

After playing, Bobic said in an interview with Sky reporter Yannick Erkenbrecher. Hertha will face three direct competitors in the relegation battle in the coming weeks: FC Augsburg, VFP Stuttgart and Armenia Bielefeld.

The fact that some Hertha players, including goalkeeper Lutka and Maxi Mittelstadt, born in Hertha, had to take off their shirts in front of the blue and white fans after the match as a sign of humility was met with incomprehension by Bobic: “I did it because I wore the shirt with pride. I understand. The fans’ frustration. Losing the third derby in a row is not fun for any of us. But we are athletes too.”

See also  Rigo and Daniel Martinez shine in the break-up, while Cairo remains sixth after stage 14 of the Tour de France

Frustration among Hertha fans after the 4-1 loss to Al Ittihad: Parts of the curve want players to symbolically take off their shirts. (Source: camera4 + photos / imago)

Annoyed, Bobic blocked the question if he would now enter into dialogue with the team due to the shirt being removed. “That’s not the point now. You asked me a question – and I wouldn’t have done it.”

Bobic also answered a question about the hope of staying in the league a little upset. “The next matches are tough. But the relegation battle is always tough. Have you seen one (a relegation fight, editor’s note) where things just work out? Not me. It’s always been a fight to the end. And you have to accept a fight. Nothing has changed in the schedule. Starting point for next week.” Are the same “.

Next Easter Saturday (3.30pm) in Augsburg will show if Hertha can take the next step from the basement. The rival FB Stuttgart (15th place, one point more) then plays simultaneously on Mainz 05, while Armenia Bielefeld (16th place, equal points) hosts Bayern Munich the next day.