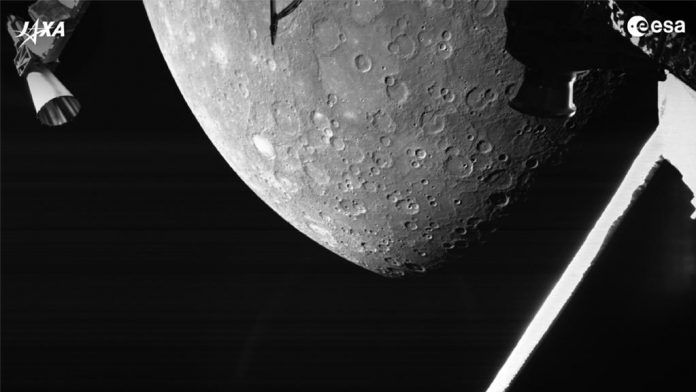 The BepiColombo space probe has sent the first images of Mercury back to Earth. They show a surface reminiscent of an old friend – the moon.

Nearly three years after its launch, the European-Japanese space probe “BepiColombo” took its first image of the planet Mercury. As the European Space Agency announced on Saturday, the probe has sent black and white images to Earth after its first flyby of Mercury, where the planet’s northern hemisphere can be seen. With its large craters, the surface of Mercury resembles killing.

According to the information, the space probe flew over Mercury at an altitude of 199 kilometers. Since the arrival of “BepiColombo” on the night side of the planet, conditions have been “not ideal” for capturing images at close range, the European Space Agency explained. So the next photo was taken from a distance of about a thousand kilometers.

BepiColombo began on October 20, 2018, on a seven-year journey to the smallest and least explored planet in our solar system. The mission to the planet closest to the sun, named after Italian mathematician and engineer Giuseppe “Pepe” Colombo led by the European Space Agency, is Europe’s most complex space project to date.

The journey is especially complicated due to Mercury’s proximity to the Sun. Given the Sun’s immense gravity, it takes so much energy to slow a space probe so that it can swing into orbit around the innermost planet of the solar system.

Several rounds to slow down

In the case of “BepiColombo”, this means: In order to set the speed, the probe must complete a total of nine planetary flights. It has already passed close to Earth once and has passed Venus twice. After a total of six flights of Mercury, the probe is expected to swing into orbit around its target planet in 2025.

So far, only two missions by NASA have reached Mercury: Mariner 10 in the 1970s and the Messenger space probe, which orbited Mercury from 2011 to 2015.

The mission of “BepiColombo” is to investigate the properties of the internal structure of Mercury and its magnetic field, and among other things, to investigate the question of whether there is ice in craters facing away from the Sun.

On Disney +, are we really at risk of indigestion from...

Faced with the state of Warzone, players are demanding change