On April 12, the Interministerial Digital Directorate (Dinum) introduced a new non-sensitive file transfer service called “France Transfer”. It provides the ability to share files, up to 20 GB (maximum 2 GB per file), between state agents and with all their external interlocutors (users, partners, service providers, etc.) in both directions. The only prerequisite is that the sender or recipient(s) be a government employee. This status is checked via a professional email address.

Up to 100 recipients
The tool makes it possible to send a letter to up to 100 recipients, with the ability to import a list of contacts, customize the transmission via a password, retention period, sending methods, etc. A confirmation code is sent to the e-mail address of the state agent or user used to send the file.

For security reasons, files sent after the envelope has expired are deleted. By default, the duration is set to 30 days. No automatic envelope deletion when all recipients have downloaded it, sets Dinum. It is 3DS Outscale, the cloud subsidiary of Dassault Systèmes, which is responsible for hosting the transmitted data until it is downloaded by the recipient. 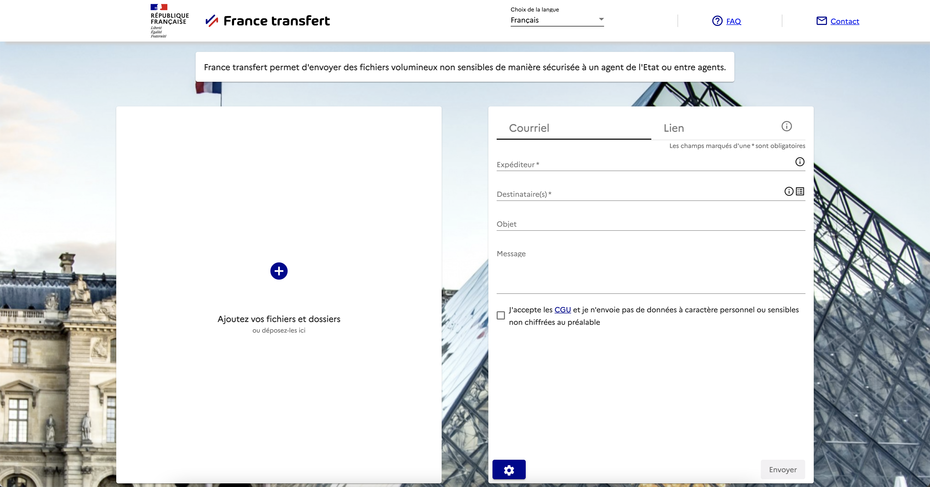 10,500 downloads and 15,000 downloads
The tool was designed and operated by the Ministry of Culture. Estelle Cheng, product manager in the digital department at this ministry, says,The need for such a tool emerged from the field in 2018 [des] Regional Directorates for Cultural AffairsThe first prototype was developed in July 2020 and has since been tested. Over the past two months, France Transfert has recorded 10,500 shipments and 15,000 downloads. For its part, the Ministry for Europe and Foreign Affairs decided to make it virtual a tool for its 13,700 clients.

France Transfert is part of the “Digital General Agent Backpack” (SNAP), a digital work environment based solely on French and open source solutions. A way to compete with the solutions offered by the large American companies that have long been acclaimed by the French administration. However, since the abolition of Privacy Shield, which has re-launched the debate on digital sovereignty, the use of such solutions has come into great question.

Forget about American tools
This is how Club Bo Hanna, director of Dinum, published a circular in September 2021 indicating that agents should not use the Microsoft 365 (formerly Office 365) offer. The National Accounts and Liberties Committee (CNIL) also banged its fist on the table. Universities are doomed to dispense with it.”Cooperative suites for education“It was marketed by American companies because”Transfer of personal data to United State“.