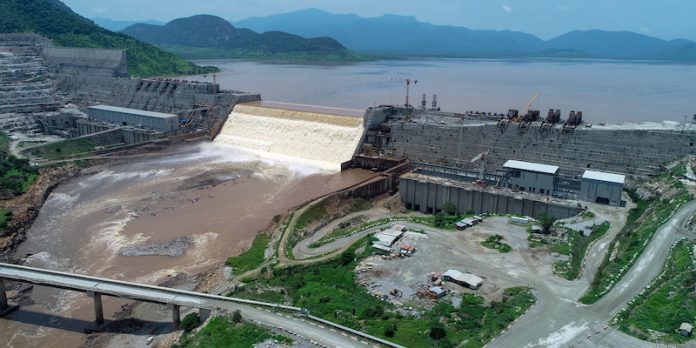 On Sunday in Ethiopia, electricity production began at the Great Dam that was erected in recent years on the Blue Nile, a river that originates in the Ethiopian mountains. The dam called the Grand Ethiopian Renaissance Dam, or GERD for short, is the largest hydroelectric power station ever built in Africa, and since 2011, when its construction began, It is at the center of the dispute between Ethiopia and Egypt.

In fact, the Blue Nile is fundamental to Egypt’s water supply: about 15 kilometers east of the Renaissance Dam it enters the territory of Sudan, and near the Sudanese capital, Khartoum, it joins the White Nile, which arrives from Uganda. Together, the two rivers form the Nile, which then crosses all of Egypt, making agricultural activities and life in general possible in a largely desert area, and finally flowing into the Mediterranean.

Since the beginning of the construction of the dam, and with the work increasingly progressing, Egypt has taken an interest in Ethiopian plans to fill the basin created by the structure, starting in 2020. Egypt’s concern is that the pooling of water in the basin could harm Egypt’s water resources for a few years.

In recent years, the two countries’ governments have accused each other of not respecting international standards for the management and use of the Nile’s water. Egypt argued that a project like the dam could not be implemented without its consent, due to two international agreements with Sudan, one dating back to 1929, during the colonial era, and the other to 1959: the first gives Egypt the power of veto over infrastructure construction along the Nile; The second states that Egypt is responsible for approximately 66 percent of the Nile’s water, and 22 percent for Sudan.

See also  US bishops against abortion and no company for Biden?

– Read also: The Mekong River is in danger

The Ethiopian government responded that it does not recognize the agreements, since they were signed without the involvement of Ethiopia, and therefore has the right to develop its own project. In 2010, it agreed with other countries in which the Nile Basin is divided – with the exception of Egypt and Sudan – to implement projects along the river even without Egyptian approval. Moreover, Ethiopia has always emphasized that the new dam will not have any effect on the amount of water reaching Egypt, contrary to what the Egyptians had feared.

The African Union, an intergovernmental organization for the countries of the African continent, tried to mediate between Ethiopia, Egypt and Sudan in order to find a compromise on the timing of filling the dam’s basin, but it was also unsuccessful because ‘Ethiopia’. It does not want to agree with other countries on the minimum amount of water that will pass through the dam.

Since November 2020, relations with Sudan, which in turn is concerned about water supplies, have become more complicated due to Civil conflict in progress in the Tigray regionin northern Ethiopia, has pushed tens of thousands of people to seek refuge in Sudan, already suffering from many internal, political and economic problems since then. October 2021 coup. There is also a territorial dispute between Sudan and Ethiopia over the Fashiqa area, which is cultivated by Ethiopian farmers but claimed by the Sudanese government.

According to the forecast, once the hydroelectric power plant in the Grand Ethiopian Renaissance Dam is completed, it will have a maximum capacity of 5150 MW and will produce 15,700 GWh of energy annually. Ethiopian state media said the plant’s turbines started producing 375 megawatts on Sunday. The dam is 84 percent complete.

The opening took place in the presence of Prime Minister Abiy Ahmed and there was also Pietro Salini, CEO of WeBuild, the Italian multinational construction company which was called Salini Impregilo until 2020. The company also built another large dam in Ethiopia, on the Omo River: called Gilgel Gibe The third was completed in 2015.

– Read also: We must rethink hydropower