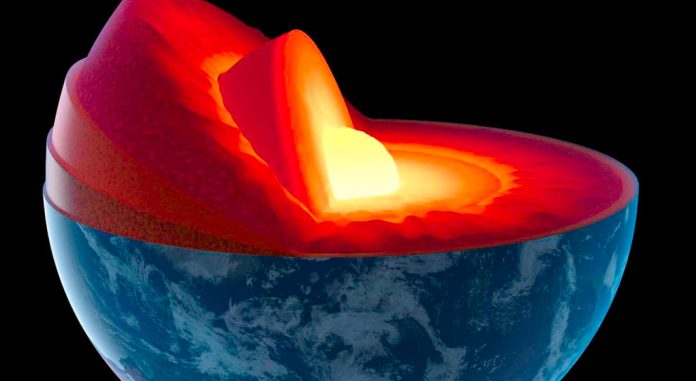 Researchers from the Federal Polytechnic School of Zurich in Switzerland, with guidance from Dr. Motohiko Murakami, as well as specialists from the Carnegie Institution, based in Washington, USA, published in the journal Earth and Planetary Science Letters Study shows Earth’s core temperature is dropping sooner than previously thought.

Scientists have developed, under laboratory conditions, A system for measuring the thermal conductivity of a mineral known as “bridgemanite”, located on the boundary between the Earth’s outer core of iron and nickel and the lower mantle of the molten liquid above it.

These measurements were made under the conditions of pressure and temperature prevailing inside the Earth.

“This measurement system allowed us to show that the thermal conductivity of bridgemanite is about 1.5 times higher than previously assumed,” Murakami said in a statement.

This indicates that the heat flow from the core into the mantle is also greater than previously thought. Increased heat flow, in turn, increases the mantle convection and accelerates the cooling of the Earth.

Murakami states that his results “can give us a new perspective on the evolution of Earth’s dynamics. They suggest that Earth, like the other rocky planets Mercury and Mars, cools down and hibernates much faster than expected.”

However, at the moment, it is not possible to determine exactly how quickly it cools and when its core freezes, and, accordingly, the end of geological activity.

Experimental Advanced Superconducting Tokamak (East) from China is an artificial sun, which broke a new record by operating at a temperature five times hotter than the sun for more than 17 minutes.

Update 1.7.2 is rolling out without notice