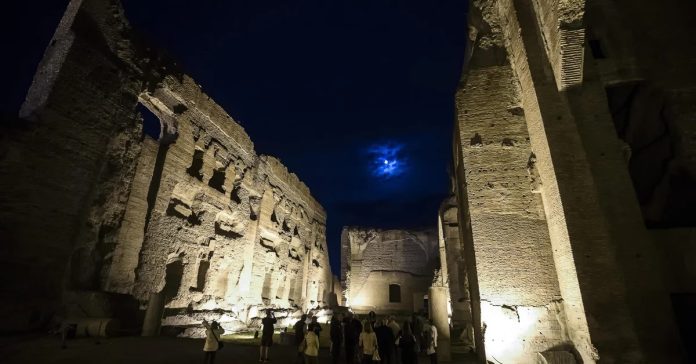 Visitors view the exterior of the Baths of Caracalla in Rome, Italy, in file photo. EFE / Angelo Carconi

Rome, January 5 (EFE). – The archaeological ruins of the Baths of Caracalla, the huge complex built in the third century by order of Emperor Caracalla in Rome, will not have a fast food restaurant in its vicinity, after the Italian Council and the Ministry of Foreign Affairs refused to resume the American chain of McDonald’s restaurants.
“It is a project to refuse to open a McDonald’s restaurant in the Baths of Caracalla, the area in which the property is located is protected by a regional landscape plan and included in the protected historical center as a site belonging to the United Nations Educational, Scientific and Cultural Organization (UNESCO),” stated the decision of the body that reviews administrative decisions issued A few days ago.
The chain brought the case before the Council of State after the Regional Administrative Court (TAR) of Lazio, of which Rome is the capital, rejected the chain’s appeal in June 2020 after rejecting the possibility of opening the restaurant, although it had initially obtained permission.
A year ago, in July 2019, the announcement of the opening of a restaurant next to one of Rome’s most famous archaeological sites sparked a huge media outcry, and the capital’s mayor at the time, Virginia Raggi, called for the project to be suspended. which have obtained permission from local, regional and national authorities.
Raggi’s suit was supported by the then Minister of Culture, Alberto Bonisoli, who rescinded the permission and appealed McDonald’s to justice, claiming that this decision prevented the creation of about 60 jobs at the point of sale that would have opened on a building adjacent to a private garden rather than on the land next to the old thermal baths. .
The court then ruled that the Lazio region and the Ministry of Culture could “order the cessation of works aimed at altering the landscape” at both existing heritage sites and sites “the authorities intend to protect”, according to local media.
The Baths of the Roman Emperor Caracalla (211-217 AD) is one of the largest and best preserved examples of ancient thermal baths, as well as being considered the most luxurious building of the Roman Empire.
Surrounded by huge marble columns, it has beautiful marble floors, decorated with glass paste mosaics, and walls decorated with huge paintings and statues that were found in each of the different rooms and in the spacious gardens.
Currently, its archaeological ruins, in addition to being visited by tourists, in the summer become an open-air theater where operas such as “Carmen”, “Tosca”, “Nabucco” were performed, and in which legendary concerts were held. Such as those presented by Tenor Placido Domingo, Jose Carreras and Luciano Pavarotti in July 1990 directed by Zubin Mehta.

See also  Here is the article to read if you haven't understood the true meaning of what Facebook will create 10,000 jobs for

Jeff Bezos sues NASA over a contract to build a lunar...