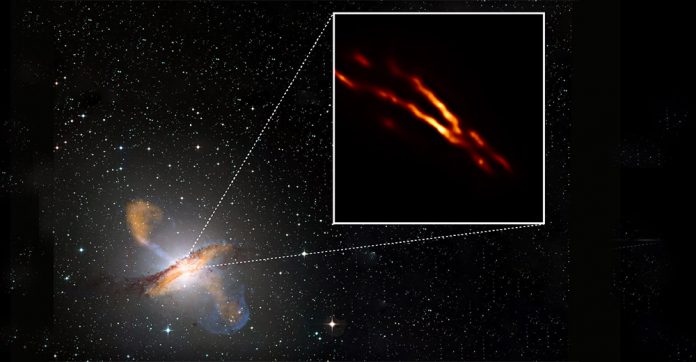 Jets in view: Centaurus A is best known for its “loud” black hole. Astronomers have now observed this object and the radiation and streams of particles emitted from it for the first time using the Event Horizon Telescope – 16 times more accurately than ever before. Dual radio telescope images reveal, among other things, that Centaurus A’s jets are noticeably brighter at the edges. This calls into question some theoretical models, the researchers reported in the journal Nature.

The Event Horizon Telescope (EHT) is currently the sharpest “eye” in radio astronomy. In this network of telescopes, radio telescopes around the world are connected by interferometry in such a way that a virtual antenna is made according to the diameter of the Earth. Thanks to this technology, astronomers were able to provide the first image of a black hole in 2019. Other recordings revealed magnetic fields in the black hole M87* and that the ring of light on the event horizon oscillates slightly.

Astronomers have also captured streams of fast particles and radiation emitted from this black hole with the help of the EHT and other telescopes. These jets rush into space at nearly the speed of light and transport energy and matter over vast distances. But it is unclear how and where aircraft are formed and where their enormous energies come from.

The ‘top’ black hole on the horizon

Now the Event Horizon Telescope also provides important data on this topic. After M87, radio jets have now targeted another active galaxy – Centaurus A. The active galactic core of this galaxy, about 13 million light-years away, was identified as early as 1949. Michael Jansen of the Max Planck Institute for Radio Astronomy in Bonn and colleagues explain that “Centaurus A is the closest loud radio source to Earth”.

See also  Blizzard cancels BlizzCon 2022 and talks about the future

For their study, Jansen and his team observed the core of Centaurus A for several hours in April 2017 using EHT’s coupled telescopes in the 1.3 mm wavelength range. Antennas in the Southern Hemisphere were especially important because they had a clear view of Centaurus A. These included the Large Millimeter/ Submillimeter Atacama Array (ALMA) and the Atacama Pathfinder Experiment (APEX) in Chile, the James Clerk Maxwell Telescope in Hawaii and the Antarctic Antarctic Telescope.

The result of this coordinated action is the most accurate radio recordings of the Centaurus A jet to date, showing it at a frequency 10 times higher and a nominal resolution of 25 microarcseconds — 16 times higher than previous recordings. “This allows us for the first time to examine an extragalactic radio jet at scales smaller than daylight. We see up close how a massive, gigantic jet is generated from a supermassive black hole,” Jansen says.

The lightest edges of narrowing theories

The images clearly show a brighter radio jet pointing toward us at an angle to the northeast, as well as its weaker counter jet pointing toward the southwest. The structure and characteristics of these particle flows correspond relatively well to the larger jets of M87*. The astronomers report: “By our observation, we prove that the fundamental relationships between activity and jets are valid for black holes of both sizes.”

One feature shown by the EHT images of black hole jets is particularly interesting: the particle streams are brighter at the edges than at the center. This phenomenon has already been observed with other aircraft, but it still appears in this detail. “We can now rule out all theoretical jet models that cannot reproduce this bright brightness,” says co-author Matthias Kadler of the University of Würzburg. “It’s a remarkable observational feature that will help us better understand such aircraft.”

Can we see centaur A*’s shadow, too?

The EHT images also give a preliminary indication of the exact location and size of the black hole in Centaurus A. Accordingly, the black hole’s shadow has a size of about 1.4 arcminutes. Therefore, the origin of aircraft departing beyond their event horizon is in an area that, in our view, is only the size of an apple on the Moon.

However, even the resolution of the Event Horizon Telescope is not enough to take a picture of this black hole. Since Centaurus A* is much smaller than M87*, the telescope’s network must be supplemented with an in-orbit radio telescope. With such a hypothetical antenna with a diameter of about 8000 km and a frequency of several terahertz, one could make visible the shadow of the “high” black hole of Centaurus A, Janssen and colleagues calculated. (Natural Astronomy, 2021; doi: 10.1038/s41550-021-01417-w)