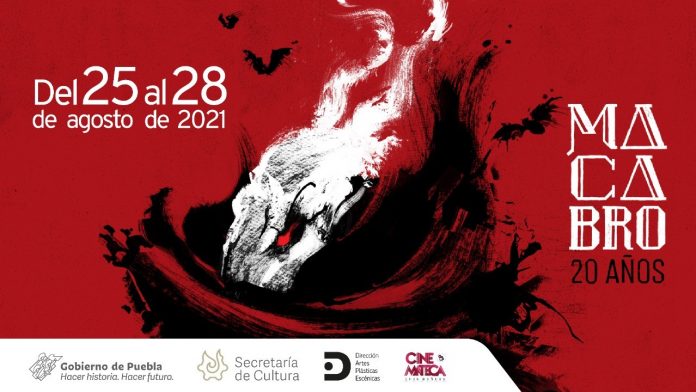 In order to promote cinematic art in society, the Ministry of Culture participates in the celebration of the 20th anniversary of the “Macabro Festival 2021” by showing various horror films in the cinematheque “Luis Buñuel”.

Various movie titles can be watched from August 25th to 28th at 5:00 PM and 7:00 PM. Among the films to be shown by the agency, the following stand out: “Lo más Macabro de Caostica” Volume 6, a carefully selected selection of the most unusual short films and videos from the Caostica Festival in Bilbao, Spain; “Here on Earth” by Rebecca Trejo and “El Hombre Buffalo” by Jaime Villa, both Mexican, among others.

This festival began as a showcase for contemporary horror cinema, as well as to salvage and re-evaluate classic cinema. This celebration, which takes place without interruption annually, has achieved continuous growth, without losing its essence as a coach for the masses and the community.

This edition consists of 109 films from 27 countries, including 51 feature films and 58 short films. For more information about the program and its schedules, those interested can refer to the Facebook page: Cinemateca Luis Buñuel Puebla. Access will be in limited capacity and the corresponding health measures for COVID-19. Also check out FilminLatino platforms (www.filminlatino.mxcinema platformhttps://plataformacine.com).

See also  Pablo Monteiro will not go to rehab and asserts: "This is willpower"

In a short time: Wendlers have a lot of likes on...