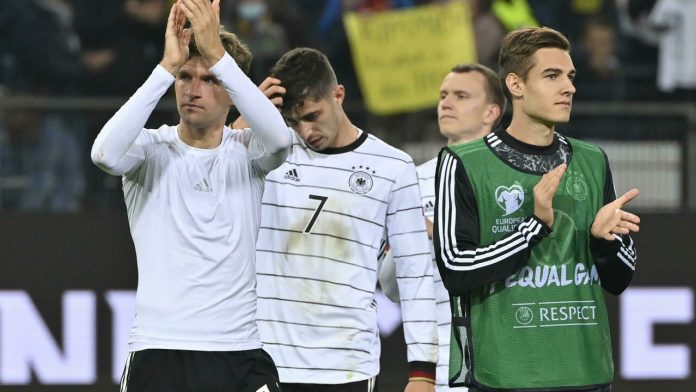 Germany showed patience on Friday to beat Romania 2-1 in Hamburg, but the win brings Hansie Flick men closer to qualifying for the 2022 World Cup in Qatar.

The victory was verified by goals from Serge Knabry (52nd) and Thomas Mல்லller (81st), after Ianis Hockey (9th) had a six-point lead over Macedonia in the north of Germany, controlled by his next opponent and Armenia, Iceland, on Monday.

After three wins without conceding a single goal since Hansie Flick came on the bench, the Germans found themselves leading for the first time.

And the Barcelona goalkeeper, who replaced the injured Manuel Neuer at the waist, can reconsider his frustration: he conceded the only three goals conceded by Germany in these World Cup qualifiers, while Neuer kept his goal empty.

In front of the Hamburg audience (25,000 authorized viewers), it took a long time for Monseft to recover from this initial knockout. Especially since the Romanians had come to the defense the five-row and sacrificial attitude behind it was shared by the whole team.

See also  Torode, of course: Schalke after a last-minute win on the way up

Trapped in this spider’s web, Joshua Kimmich’s teammates (who inherited an alternative team without Neuer and Thomas Mல்லller) tried to shoot from a distance. But Knabri (34th, 44th) and Rudiger (45th + 1st) had no accuracy, while Marco Reyes (33rd) and Kimmich (45th + 2) stumbled over goalkeeper Florin Nita (Sparta Brock).

Knobri finally threw the lock into the second period with a superb cross shot from outside the box in the 52nd minute.

At 1-1, the Romanians did not change their tactics in any way, playing even less, providing a tough physical challenge, pushing all the crosses and all the shots of the four-time world champions back against the wall.

Dominant, but without clear opportunities, Germany showed patience. Mansoft is presented with a combination of “Bayern Munich”: Leon Goretska (played the Joker) position (2-1, 81st) to Thomas Mல்லller from Kimmich’s corner, head to toe.

Tony Parker (President of Aswell): “I have always had faith in...