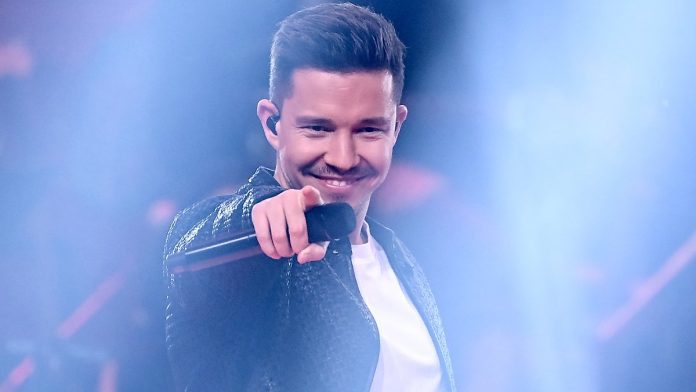 I say yes in Mallorca
Nico Santos under cover

As a juror on “The Voice of Germany”, Nico Santos always has to think about whether he wants to turn around in search of talent. On the other hand, with his girlfriend Eileen, he probably had no doubts for a long time that he would include her in his team. The two are now married.

Nico Santos hit the bell once and for all. The coach of “The Voice of Germany” married his girlfriend Eileen in Mallorca, and it was documented, among other things, by several photos of the singer on his Instagram account.

You can see different impressions of the romantic celebration. The first picture shows the newlyweds kissing each other in front of an arch decorated with flowers. The bride wears an off-the-shoulder floor-length white tulle gown with a sheer lace veil. She styled her blonde hair in a loose look. Santos chose a cream suit with a white shirt and dark brown suede shoes for his big day.

Another photo shows a close-up of the couple kissing. The third picture shows the newlyweds fighting with a pinata. Finally, the fourth shot shows how the two are celebrated by the other wedding guests, who were also brightly dressed.

“Likes from a picture book”

In the description, the singer only linked the account of his loved ones. He also added a little heart.

Many stars and colleagues from Santos congratulated the newlyweds in the comments. “Your love story is like a picture book. Congratulations! I’m so happy for you,” wrote influencer Daji Bey. More congratulations came from Lena Jerke, Victoria Swarovski, Rebecca Meir, Michael Schulte and Lena Meyer-Landrut. “The best duo in the world!” Excited by Alvaro Soler.

Nico Santos’ real name is Nico Willenbrink. He is the son of Egon Willenbrink, who is remembered by many as the “Melita Man” due to his role in several commercials for a coffee brand in the 1990s. On the other hand, Nico Santos started his career as a musician at a young age. The now 29-year-old celebrated his accomplishments in 2017 with the song “Rooftop”.