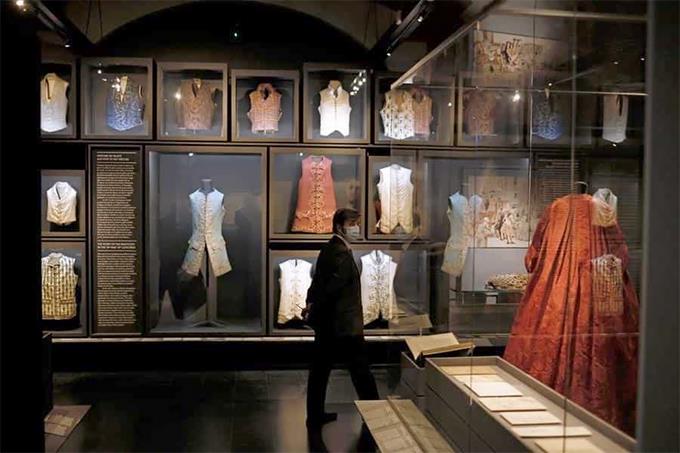 Paris Fashion Museum, the Palais Galliera, opened its doors next Saturday for the first exhibition of his collections, a rich collection of 200,000 pieces that will gradually be on display and will allow visitors to discover the capital’s fashion history with excellence in design. .

A year after its reopening, which included a major retrospective of Chanel, the patron of the two-year restoration, the Galliera on the ground floor houses some of the stellar pieces from its collection, such as the Countess’s Cabinet. by Greffulhe and some avant-garde clothes from Comme des Garçons or Rick Owens.

The gallery, arranged chronologically, brings together the idiosyncrasies of each period, from the cottons imported from India that became fashionable in the last decades of the eighteenth century, and the gold and silver thread dresses that represented the luxury of the ancien régime embodied by Marie Antoinette and closed by the French Revolution.

Nineteenth-century prints, such as cashmere, were not only incorporated into dresses, but also into men’s jackets and robes at home.

This new decorative opulence shows cultural influence between Asia and Europe in the nineteenth century, and is evidence of the only opulence allowed in a men’s wardrobe, which preserved the imagination for moments of being at home while sobriety reigned on the street.

The accessories, infused with chiffon lace, silk, feathers, and semi-precious stones, evoke the cosmopolitan clientele of Paris at the time, revealing the emergence of a new bourgeois society in which the character of the gandor gives way to a man who is less and less concerned.

“The main reason for launching a project to renovate and transform the museum’s basement into new galleries is to be able to present the museum’s collection and fashion history from the eighteenth century to today,” said Meren Arzaloz, director of the EFE Foundation.

The museum’s origins date back to 1920, when the city received a donation of 2,000 works from the Society for the History of Clothing, founded a decade earlier by Maurice Leloire, which housed an important collection of dresses from the old order and rebirth. enlightenment.

In this first exhibition, the Galliera shows the evolution of the wardrobe, with the crinoline disappearing from the women’s wardrobe and being replaced by another armour, the bustle, before giving way at the end of the nineteenth century to more straight lines that culminated in the early years of the twentieth century with the liberation of the female body.

Paul Poiret imposed simplicity, inspired by oriental jackets, as Mariano Fortuny and Madrazo did in those years.

The exhibition follows the development of the twentieth century through Cristóbal Balenciaga or Christian Dior, until it reaches contemporary creators such as Comme des Garçons or Martin Margiela, responsible for abandoning traditional Western fashion canons, questioning even the principles of beauty.

One Hundred Years of VOGUE PARIS

Strict clothing storage requirements dictate a rotation of exhibits every six months or so, although the box display will alternate with other retrospectives and temporary loans.

In this case, the History of Fashion, open to the public until June 26, is punctuated by another exhibition dedicated to the centenary of the Parisian edition of Vogue (until January 30).

Vogue Paris, the collection’s only major title to include the capital’s name in its title, is revealed through the exhibition as a reflection of the city’s cultural and artistic life.

Galliera exhibits around 400 works including photographs, reproductions and designs on the close relationship and influence of editors on designers such as Yves Saint Laurent and Karl Lagerfeld, photographers such as Helmut Newton or Peter Lindbergh, and actresses and models such as Catherine Deneuve and Kate Moss, the women who were on his cover most of the time. .

RTL is leaving a reporter who appears to have smeared themselves...

JLo shows off his body and Ben Affleck on his 52nd...