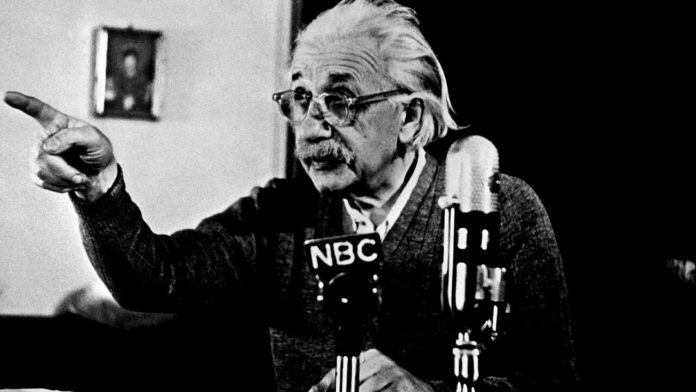 The sum is astronomical and logical when it comes to Albert Einstein. A manuscript in which the famous physicist prepared his theory of general relativity was auctioned for a record 11.6 million euros, on Tuesday, November 23 in Paris.

It is a 54-page manuscript written by Albert Einstein himself in 1913 and 1914 in Zurich, with his assistant and confidant Michel Besso. ” Einstein’s scientific signature documents from this period, and more generally from before 1919, are extremely rare. It was confirmed before the sale of Christie’s, where the auction of the home Agutes took place. Thanks Beso” The manuscript has almost miraculously reached us : Einstein probably didn’t bother keeping what might sound like a working document to him ».

Initially, the document estimated between two and three million euros. Auctions started at 1.5 million and lasted within a few minutes, ending with a fight between two buyers over the phone with increments of €200,000. The document was eventually sold for €11.6 million at costs (10.2 million excl.).

The nationality of the buyer was not known at the beginning of the evening. A hundred curious and collectors were present in the room, and none of them were bidders.

Far ahead of previous auction records

At the beginning of 1913, Einstein and Besso « It addresses one of the problems that the scientific community has faced for decades : anomalies of the orbit of Mercury ‘” remember Christie’s. The two worlds will solve this puzzle. Not in the false accounts on this manuscript that counts” A number of errors that went unnoticed When Einstein discovered them, he was no longer interested in this manuscript that Besso had taken.

After his theory of special relativity, which had him demonstrating in 1905 the famous formula E = mc², Einstein began work on the general theory of relativity.

This theory of gravity, finally published in November 1915, revolutionized our understanding of the universe. Einstein died in 1955 at the age of 76, and became as much a symbol of scientific genius as he became a popular figure, with the famous 1951 photograph where his tongue sticks out.