Persia Digest
Home science An exoplanet in space: heat until it rains iron – an amazing... 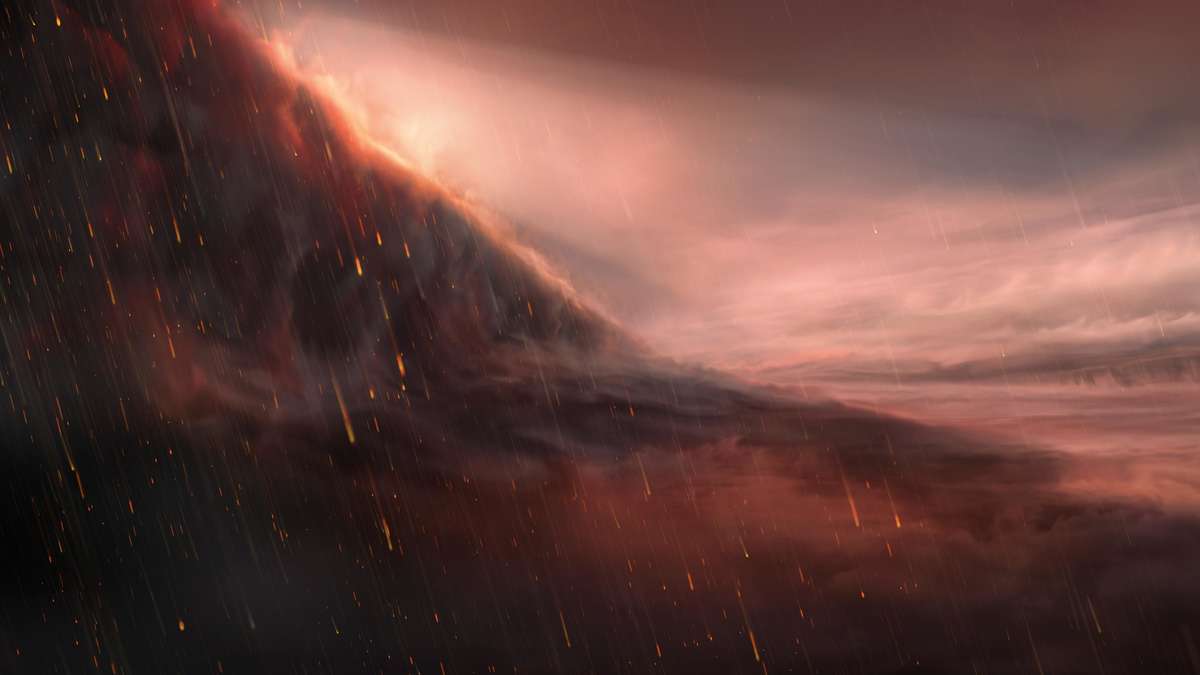 Exoplanet WASP-76b is so hot that iron is melting. Another startling discovery illustrates: the planet is arguably more extreme than it’s supposed to.

Castle – The exoplanet WASP-76b is an extreme planet: it is massive, very close to its star and very hot. A new discovery now indicates that an exoplanet appears to be more extreme than previously assumed.

But let’s start from the beginning: Exoplanet WASP-76b was discovered in 2013 and classified as a “hot Jupiter.” That is, it is a gaseous planet as large as Jupiter, but it is very hot. Because of its proximity to its star, it absorbs so much radiation that it swells up. An exoplanet takes 1.8 days to orbit its star once. It always turns to the same side of its star – due to its close proximity, it gets unimaginably hot there. Research estimates the temperature on the day side of the planet at about 2,400 degrees Celsius, while on the night side it should remain 1,300 degrees Celsius.

Many metals melt at these extreme temperatures. Experts assume that iron melts in the day, is carried by strong winds to the cooler night side and condenses there and falls to the ground as molten iron rain. “These are probably the most extreme weather conditions we’ve ever been able to find on a planet,” said researcher David Ehrenreich, who in 2020 also published a study on exoplanet WASP-76b.

But now it’s getting more extreme: A research group that monitored the exoplanet using the “Gemini North” telescope on Mauna Kea in Hawaii has detected traces of ionized calcium in WASP-76b’s upper atmosphere. “We’re seeing a lot of calcium, which is a very obvious property,” confirms Emily Diebert, a doctoral student at the University of Toronto and first author of a new study on the exoplanet WASP-76b. Her team’s assumption: The discovery could mean that “the exoplanet has very strong winds in its upper atmosphere,” says Diebert. “Or that the temperature of the atmosphere of an exoplanet is much higher than we thought.” Published in the specialized journal Astrophysical Journal Letters.

The Gemini North Telescope in Hawaii is used for the multi-year “ExoGemS” project, which aims to examine the atmospheres of about 30 exoplanets. “By remote sensing of dozens of exoplanets of different masses and temperatures, we will develop a more complete picture of the true diversity of extraterrestrial worlds,” says study co-author Ray Jayawardhana. A more temperate climate. From worlds heavier than Jupiter to other worlds not much larger than Earth. “

A look into space: Today’s telescopes are examining exoplanets

It’s amazing that one can actually learn so much about the atmosphere of exoplanets using current telescopes and instruments, Jayawardhana adds and adds: “The basic components, physical properties, clouds, and even large-scale wind patterns of planets, and stars at hundreds of light-years orbit around it.”

Recently there was a astronomy* Some new discoveries about exoplanets: this one An exoplanet has been discovered, which may orbit three stars*. In addition, a A new class of planets has been identified*, which is completely different from Earth, but life on it could be possible. Another study shows how dangerous exoplanet life is: Every fourth sun-like star devours its planets*. (tab) * fr.de view from IPPEN.MEDIA.

Razer error allows you to log in as administrator on Windows...