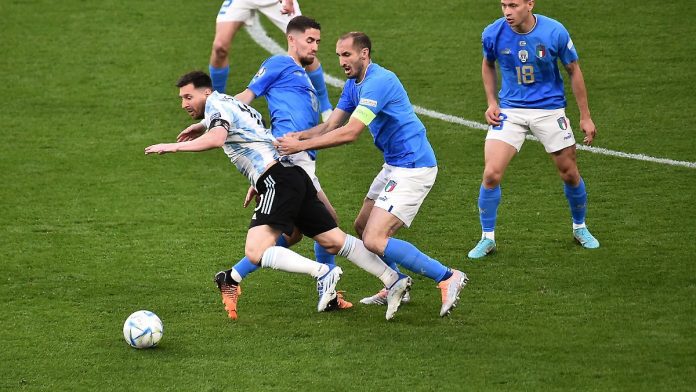 argentina wins london
The Italian legend goes bankrupt because of the bad ‘Finalissima’.

For the third time, the European champion and the South American champion will play the official winner. In London, Italy had another memorable evening after missing the World Cup. Instead, Argentina dominated Giorgio Chiellini’s last appearance and are thus celebrating.

The next defeat for the European football champions: Italy lost “Finalissima” to Argentina after nearly ten weeks of a bitter World Cup finals. Captain Giorgio Chiellini missed a successful farewell from the national team in its 117th and final international match. The Azzurri lost 3-0 (2-0) to Argentina, the South American champions, at Wembley Stadium in London.

Albiceleste’s goals in front of 87,112 spectators were achieved by Lautaro Martinez of Inter Milan (28), Angel Di Maria (45 + 2), who was the last contracted with the French series champion Paris Saint-Germain, and Paulo Dybala of Juventus Turin in the running time. Chiellini was substituted on the break from an increasingly difficult match against Manuel Lazzari.

After a 29-year hiatus, Europe and South America played their first intercontinental title. The Italians won the European Championship last year by beating England 3-2 on penalties, as well as at Wembley. The Argentines surrounding Lionel Messi had won the Copa America by beating Brazil 1-0.

The “Finalissima” was the new version of the Artemio Franchi Cup, and it was officially about the “CONMEBOL-UEFA Cup of Champions”. The European and South American continental champions have already been compared twice. In 1985, France led by Michel Platini defeated Uruguay 2-0 in Paris, and in 1993 Argentina led by Diego Maradona defeated Denmark 5-4 on penalties.

Moving to the United States imminent

The Italians around the 37-year-old’s favorite Chiellini were clearly inferior. Argentina largely dominated the event, much to the delight of the Argentine fans. Messi in particular could have produced a higher result, but his fellow Parisian Gianluigi Donnarumma prevented him in the Italian goal.

An interesting encounter with Argentina’s Messi was Chiellini’s 117th engagement, nearly two decades after his debut. “When I was a kid I didn’t think or even hope to get this far,” the defender previously said. Born in Pisa, Chiellini came to record champion Juventus Torino via AS Livorno and AC Florence in 2005, where he shaped an era in 17 years with nine championship titles and five cup titles.

Chiellini, who will turn 38 in August, announced his departure from the Squadra Azzurra, in which he made his debut in 2004, after failing to qualify for the Qatar World Cup. The powerful centre-back is also leaving Juventus after 17 years, and his new employer could be Major League Soccer’s Los Angeles FC.