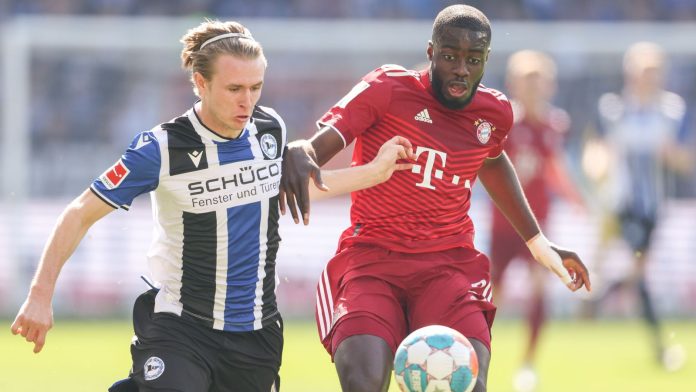 FC Bayern Munich in the best game against Borussia Dortmund to determine the title. Five days after the bitter Champions League defeat against FC Villarreal, the record champions won 3-0 (2-0) at the bottom-two Armenia pilefield on Easter Sunday. Munich could finish the tenth consecutive championship early Saturday with a win over BVB.

Following their disappointing Champions League exit, FC Bayern soon wanted to add a sense of record to the Bundesliga. “You can say the resurrection will be very good at Easter,” Bayern coach Julian Knucklesman said before playing at DAZN.

The record champions made themselves clear on the field from the start, but in the eighth minute Bealfeld’s Patrick Wimmer had the first chance to score. After that, Robert Lewandowski missed a great opportunity for Munich. Then in the tenth minute Bayern equalized 1-0: Jacob Larson hit the ball into his own goal.

But Bielefeld did not give up and looked for balance: Masaya Okugawa’s volley missed a goal. Leon Goretzka, on the other hand, lost to Stephen Ortega (16th) from the top position. As a result, the guests were always in forward gear, but lost their determination in the last third of the field. So they missed more clear results.

In the final half of the first half, the East West Polynesians warmed up and almost equalized with an offside goal from Okugawa (44 ‘) and Manuel Britlin’s head (45’ + 6 ‘). Shortly before the break, Serge Knabry won 2-0 (45 + 8) with a dream pass from Joshua Kimmich.

Bayern also excelled in the second half, but Pylefeld continued to act bravely and disrupt the German champions early in the build-up game. But substitute Jamal Musiyala broke every trust that Bilefeld had in five minutes to make it 3-0.

However, Munich were lucky not to see the red card after defender Tangui Nyanso used his hand hard against Fabian Kunz just before the break. Kunze was hit in the head and taken off the field on a stretcher. This is the third head injury in recent weeks at the Table Penalty Peelfield.