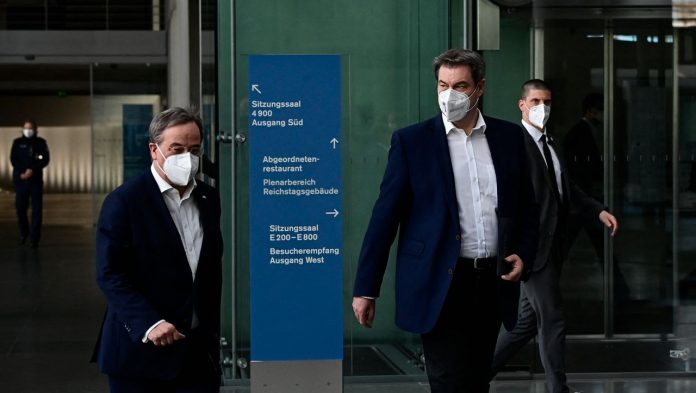 The next day, several members of the union were shocked to see what they had experienced in their parliamentary committee on Tuesday afternoon: in front of everyone, both candidates for President Armin Lacet and Marcus Soder had points, slanders, meanings – following a debate, eventually 70 parliamentarians spoke, most of whom were clear-cut. Have. What made the matter even more significant was the fact that two-thirds of them were in favor of CSU boss Soder and only one-third were in favor of CDU leader Lacette.

As a reminder: Lacet leads the big sister party, Soder the little one. This is one of the reasons why in the history of the Federal Republic of Germany a CSU politician has been allowed to run for president as president.

But the hero of Bavaria’s prime ministerial election, he is far ahead of his rival from northern Rhine-Westphalia. This argument, which Soder campaigned for himself in new variations on Tuesday, seems to be having more and more impact on the CDU.

After an unforgettable meeting of parliamentarians, the state of the power struggle is more chaotic than ever. Both parties are at a loss: how can Lacette and Soder get out of this with a little facial savings? How can the Union want to mobilize behind a candidate after the last few days of the federal election campaign have erupted?

Who has the best chance now?

The following still applies: Marcus Soder is not in control of the situation – even though the events of the past few days have significantly improved his chances. Soder is the king of elections and currently looks like the number one in the union – but for now he will be the head of the smaller CSU.

If the CDU boss does not give Lacette and the leading Christian Democrats continue to stand by his side, the matter is still in his hands. So Soder must believe – he’s been active towards this for some time – that the pressure from his own ranks on Lacet will continue to increase.

This pressure is certainly already huge, not only because of the dramatic views on the Bundestag parliamentary committee. The first regional associations have already publicly distanced themselves from Lacet. But that’s not enough – at least not yet. Lasshed seems to be more confident in his candidacy for president, especially since he has the formal support of the CDU governing bodies.

As Lacette and Soder have promised for weeks, the matter can no longer be settled amicably and by mutual agreement. Instead, the fight for the presidency is getting dirty and stressful. After all, there seems to be a lack of communication between the two applicants – there is no other way to explain why Lacet’s camp has been surprised many times before and after Soder’s actions recently.

There is agreement between the two that this matter should be decided in the coming days. But how?

Now that Merkel has been re-nominated four or more times automatically over the years it also takes its toll: there is no well-established practice among union parties when running for president.

In the end, Lacette and Soder need to clarify it to each other, so personally. But in the end there have been several talks about a delegation solution: thus, both parties can appoint mini-teams as leaders, and then they decide the candidacy for president. However, so far no one was able to send in the perfect solution, which is not strange.

Then of course there is still the option of allowing the parliamentary committee to decide. Not by counting the demands to speak for Lacette and Soder, but by a genuine vote. Such a referendum – in 1979 by Union MPs against then-CSU President Franz Joseph Strauss and Lower Saxony CDU Prime Minister Ernst Albrecht – has so far been rejected by all parties.

How should the union eventually march behind a candidate?

Former CSU boss Horst Seehofer notes: “I am suffering from this very difficult situation for the CDU and the CSU,” said Soder’s predecessor as party leader and Bavarian prime minister of “Oxburger algemin”. He thinks consensus is still possible, Seahofer says – but he doesn’t know “how they can do it”.

This is the problem: the fight for the presidency divides not only party leaders Lacet and Soder, but the entire union. Initially, of course, on the borders of both parties, the respective leaders have their clear supporters, but have long been in the middle of the CDU. The division’s updated process is reminiscent of many in the early summer of 2018, when controversy over refugee policy almost led to the breakdown of sister parties.

However, this system is already facing a federal election in a politically unstable situation in which the incumbent Angela Merkel is no longer running and the CDU and CSU are plagued by a number of scandals.

After this power struggle, will the union finally be able to rally behind those vying for the presidency? It’s hard to imagine who it turned out to be at the time. That, whether with Lacette or Soder, could be the biggest issue in the upcoming election campaign.