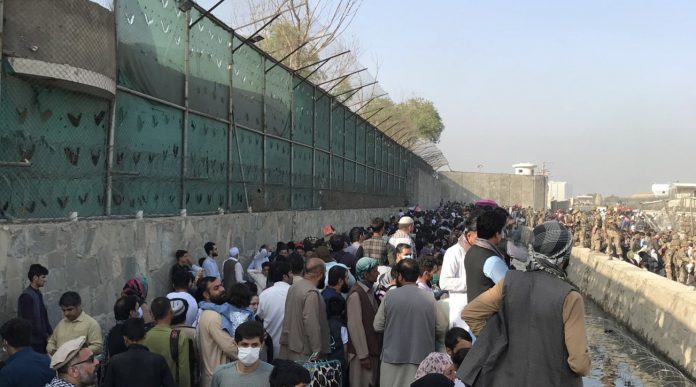 Indeed, little more than a week is missing from the fateful date, agreed in Doha between Washington and the Taliban, but at the airport of the Afghan capital there are still at least 20,000 people huddled together and tens of thousands desperately trying to be taken away from the country by one of the Several military shuttle flights to evacuate Western citizens, Afghan collaborators, and people at risk or at risk. For its part, Italy, according to data provided by the Ministry of Defense, has rescued more than 3,350 citizens, about 1990 who have already arrived in the country (of whom 547 are women and 667 are children).

Replica of the Pentagon

While the Pentagon does not respond directly to the threats, it has declared that the United States is “trying” to meet the deadline, and get all American citizens and their Afghan allies out as quickly as possible. And that contacts are underway with the new commanders in Kabul to allow the US military to extend its perimeter of control over the airport so that it can go safely and take the lucky ones who will leave,” a coordination that has succeeded so far, confirmed a US Defense Department spokesman, John Kirby.

But allies seem more realistic. At tomorrow’s extraordinary G7 meeting, held in London, which holds the annual presidency, Prime Minister Boris Johnson will ask Biden to delay the withdrawal of the US military in order to continue the civilian evacuations. Defense Secretary Ben Wallace also made it clear that – and everyone knows this – “there is no possibility of staying in Afghanistan without the United States.” French Foreign Minister Jean-Yves Le Drian said at the Al Dhafra air base in the Al Dhafra region that France also says it is “concerned” about the approaching date of withdrawal, considering that “an additional delay is necessary to complete the ongoing operations.” Emirates Airlines, where Paris has set up an air bridge to Kabul. On the other hand, Germany’s request seems more subtle, as it has already begun talks with the United States and Turkey – which offered to guarantee the security of Hamid Karzai Airport after the withdrawal, before everything collapsed – to be able to extend beyond the 31. At least civilian operations. In this regard, Minister Heiko Maas explained, that Berlin is also talking with the Taliban “and will continue to do so, because they will certainly have a special role in operating the airport after the withdrawal of US forces.” Prime Minister Mario Draghi also assessed the situation with the Ministers of Foreign Affairs and Defense, Di Maio and Guerini, on the eve of the virtual summit of the Group of Seven, and in view of the extraordinary G-20 summit, which Italy intends to hold in September in the presence of Russia and China, as the main interlocutors in the Afghan chessboard.

The meeting between Joe Biden and Xi Jinping is in danger

In this climate of international tensions, the meeting between Biden and Xi Jinping scheduled on the sidelines of another G-20 summit, the one already scheduled to take place in Rome at the end of October, in which the Chinese leader can only participate from a distance, appears to be in Danger. Chinese media say the reasons are due to concerns about the Covid epidemic, but it has also not been ruled out by poor progress in relations between Washington and Beijing, which has been further strained by the friendly – and interested – relations between China and Beijing. Taliban. The G7 will also discuss humanitarian aid, the resettlement of asylum seekers and the expected influx of migrants. The issue of respect for human rights, in particular the rights of women and girls, will also be central, under penalty of possible sanctions if the Taliban are to violate them. The United States and Canada have announced that they want to support Britain’s proposal in this regard, according to the Western mantra that the new Afghan regime will be “judged by deeds, not words.”

Tension remains in the panshir Tensions escalate north of Kabul: in the Panjshir Valley, “thousands” of anti-Taliban fighters have barricaded themselves and are “ready to fight”, surrounded by those who rose up even a few days ago, and are now in control of Afghanistan once again. But this patch of land sandwiched between the Hindu Kush mountains is resisting, as it did against the Soviets in the 1980s and again against the Taliban after the fall of Kabul in 1996. The valley is “trapped” but we are negotiating with the troops. Taliban spokesman Zabihullah Mujahid said the Northern Alliance was “to find a peaceful solution.” However, the Panshir forces are chasing news of ultimatums and the situation could precipitate at any moment.