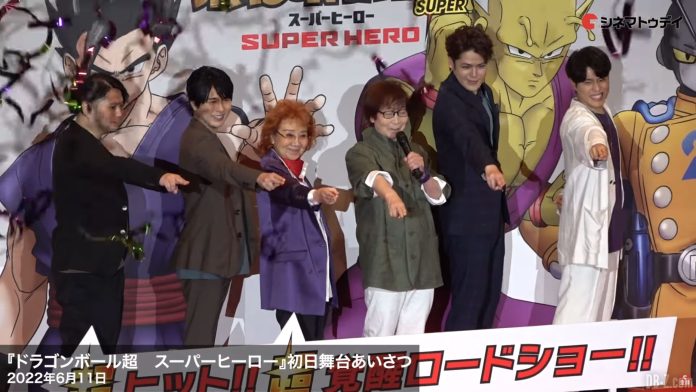 The entire conference is available on YouTube cinema today, but only in Japanese, without subtitles. So our article is mainly for those who speak Japanese, sorry for others, but the content is not so interesting that you want to translate it.

This 30-minute intervention is a question/answer exchange between the host and the actors, who are very careful not to spoil their answers. We hear them recover over and over to avoid the worst, but it’s an exercise they’re used to, so don’t worry. The questions are very ordinary, such as: How did you react when you learned that Gohan and Piccolo were the main characters in the movie, Do you have a message for your fans, all ending with collective Makankosappo, Final attack by Piccolo.

From left to right on stage:

As confirmed by Crunchyroll, Dragon Ball Super Hero is slated to release in the summer of 2022 in France and the rest of the world. Only North America has a date set for August 19 at the moment. At the moment, we don’t have an official release date, but we do know that Crunchyroll will distribute the movie theatrically outside of Japan.

It’s one of the most anticipated animated films of the year, but if you don’t want to wait to see it in theaters, the full Dragon Ball Super SUPER HERO synopsis is already available in French, along with some leaked photos and videos.

Michel Yun (French relationship): his secrets about his role as a...