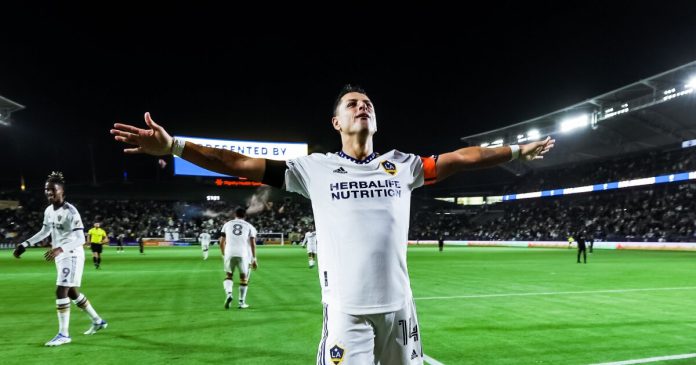 In the first Los Angeles derby of the Lamar Hunt Cup Open, LA Galaxy and LAFC looked to determine the next playoffs from the tournament’s Round of 16 playoffs. The Galactics maintained their dominance over their arch rivals with a 3-1 victory at Dignity Health Sports Park, because since the start of the so-called “El Tráfico”, LAFC has never been able to beat the Galaxy at home.

Thanks to goals by Kevin Cabral, Javier Hernandez and Dejan Jovelic, the Galaxy evened things out in their knockout matches. In 2019, LAFC eliminated Galaxy from the playoffs in what was also star Zlatan Ibrahimovic’s last game with the team.

The 24,174 fans in attendance for this match became a stadium record when the Galaxy played in the Open Cup.

However, the focus was on what would be the fourth confrontation between friends Carlos Vela and Chicharito, and the second in the MLS, but Villa did not reach 20 minutes of play. The Mexican striker appeared to suffer an injury after coming into contact with the Galaxy player inside the penalty area. Kwadwo Opoku will take his place on the field.

The Galaxy’s first real chance was in a play by Diego Costa, in the 34th minute, who entered the area from the left and sent the low center looking like Chicharito was surprised and couldn’t connect. LAFC responded almost immediately with a shot to the right side of José Cifuentes that brought him head-to-head with Jonathan Klinsmann, but Derrick Williams almost appeared out of nowhere to block the shot.

Nerves flared moments later, when Chicharito “wheeled” to Diego Palacios on a high ball, and Jesus Murillo responded by pushing the Mexican forward. Palacios remained on the grass for a few minutes after he fell on his back on the grass and his medical team had to undergo treatment.

In the second half, Galaxy came out in a similar way to the start of the match, looking for a quick goal that surprised the visitors, which they achieved in the 51st minute.

Samuel Grander sent the cross from the left and Cabral, who appeared to be offside, made it 1-0 by changing the direction of his shot to take out Maxime Crepeau.

In the 56th minute, Chicharito was present on the scoreboard after the galácticos made a stunning counter-attack to make the score 2-0. Taking off from the right, Cabral fired fast forward to Samuel Grandier, who sent in a long cross that Chicharito had to claim in the air with a semi-aerial shot and nearly sealed his goodbye for the next round. This was Chicharito’s second goal in the Classics as Villa starts.

The party didn’t stop with Galaxy, because in the 80th minute, Jovelic finished off another brilliant team match for the Galaxy XI and hit LAFC through the back door with his jewel-like 3-0 record.

He didn’t leave LAFC completely empty-handed, scoring in 84 opponents after a header from Hollinshead after a cross from the left by José Cifuentes.