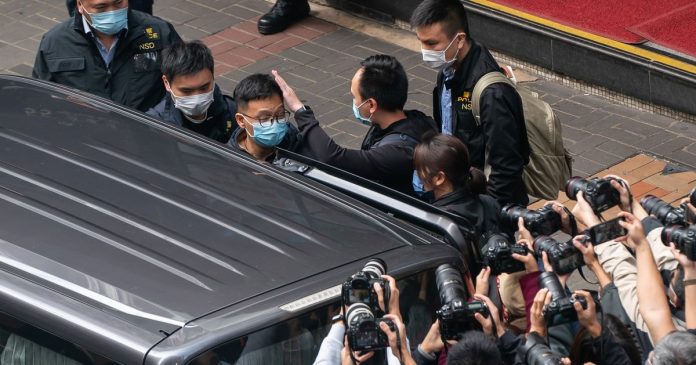 HONG KONG, CHINA – DECEMBER 29: Stand News Editor-in-Chief Patrick Lam is brought in a car after police searched the offices of the independent news outlet on December 29, 2021 in Hong Kong, China. Editors, board members and a pop singer were arrested early this morning as 200 officers raided the office. (Photo by Anthony Kwan/Getty Images)

The prospect of freedom of the press and expression is becoming increasingly murky in Hong Kong, while the consequences of Beijing’s repressive pressure on the press in the former British colony are also reverberating in Taiwan. Today, journalists and editors have been arrested in a barrage of one of Hong Kong’s most followed online news websites, Stand News, which is very popular and followed by the public, not only among activists (now a few survivors) of the opposition. The police forces of the “National Security” special team arrested the current and former editor-in-chief of the newspaper, along with four directors of the publishing company. This morning the agents showed up at the home of Lam Chiu Tong, 34, interim editor-in-chief, and former editor-in-chief, Chung Boye Quen, 52, and took them in handcuffs. Former editorial board members Margaret Ng Nguyi Yi, popular singer Dennis Ho Wan Si, Cho Tat Chi and Christine Fang Ming Sang were also arrested. The four had resigned from their positions last month. Up to 200 customers participated in the raid on the newspaper’s journalists and editors. He, a famous Cantonese pop star and prominent democracy activist, was arrested at her home at 6 am, while officers ransacked her home for more than two hours, confiscating phones and computers, as well as her identity card and passport, according to the British Guardian newspaper. CNN by personal assistant

At a press conference held a few hours ago, Steve Lee Kwai Wah, chief supervisor of the Hong Kong Police Department of Homeland Security, said that police raided the offices of the publishing company in Kwon District. Tong, and froze about 61 million Hong Kong dollars (about 8 million dollars) of the company’s assets. The supervisor defended the legality of the arrests necessary to “prevent the false portrayal of ‘rotten apples’ as media,” he said. While the Secretary-General of the Hong Kong government, John Lee, for his part, increased the dose, saying: “It is the evil elements that harm the freedom of the press. Professional media workers should realize that the arrested are the bad people who abuse their positions by wearing Fake jacket for media workers.”

But this new repressive pressure on the press, implemented under the “National Security” Killing Liberty Act, which Beijing imposed after the 2019 peripheral anti-China demonstrations in Hong Kong, also caused repercussions in democratic Taiwan (which only Beijing considers a “”boycott” rebellious ”, which is part of the motherland and is destined to be reunited, by hook or crook). In Taipei, in fact, the local sister site of the former Hong Kong newspaper Apple Daily, which was founded by media mogul Jimmy Lai in prison in Hong Kong for some time now, has been put up for sale by the company’s liquidator. . After Lai’s arrest and detention – again for an alleged violation of Hong Kong’s national security law – which followed the confiscation of the publishing company’s shares and all of its assets, it was almost impossible for the newspaper to continue publishing, and now even its Taiwan “branch” is forced to shut down.

Last June, after Jimmi Lai was arrested and Apple Daily shut down in an attempt to avoid the same fate, Stand News announced that it would temporarily remove most comments hosted on its site and suspend comment subscriptions, while the platform also stopped accepting new donations last month. But even these self-censorship measures have not succeeded in preventing editors and publishers from ending up in prison for “conspiracy to print or distribute inflammatory publications, in violation of Sections 9 and 10 of the Crimes Act,” Hong Kong police said in an official statement hours ago. few. An inside source said the officers who carried out the raids this morning also took Ronson Chan Ron Singh, deputy director of Stand News and head of the Hong Kong Journalists Association, from his home for “interrogation”. Hong Kong police, but they are not “under arrest”, at least for now.

But apart from the state of press freedom in Hong Kong – which has now been virtually stopped – attempts by Beijing to extend “Manus Longa” crackdown on the press also in Taiwan, the story of the attempts raises concern about the company’s Taiwanese sister company liquidation. The imprisoned billionaire Lay drew international attention to the case. According to the Taiwanese press, in fact, liquidators appointed by the Hong Kong court have asked the local twin, Apple Online, to hand over three decades of readers’ personal data to the Hong Kong authorities. But local human rights groups have staged protests in Taipei calling on the “rebellious island” democratic government to prevent liquidators from handing over the data, which Hong Kong authorities could use to try to arrest and imprison the data as well. Taiwanese users, accused of violating the national security law, which affects not only Hong Kong but – according to Beijing – also Taiwan, where it is an inalienable part of Chinese territory.

On Monday, Taiwan’s Ministry of Culture said that Hong Kong courts and liquidators do not have the right or jurisdiction to obtain such data, because its use is protected by Taiwan’s constitution and law. He added that only after the approval of a Taiwanese court – perhaps – can this data be submitted to Hong Kong.

In a recent document, the Hong Kong Journalists’ Association (HKJA) literally stated that press freedom in the former colony was “in tatters,” citing Jimmy Lai’s arrest and the enforced closure of his media outlets. and increased censorship in the public media by passing the China-imposed National Security Law, adding that such “oppressive policies” irreparably damaged not only the city’s media landscape, but also its international reputation. Once a bastion of press freedom in Asia and around the world, Hong Kong slipped from 18th place in 2002 to 80th in 2021 in the Reporters Without Borders World Press Freedom Index.

See also  Latest news of Ukraine. Dugin's car explodes in Moscow, killing his daughter. Pro-Russians accuse Kyiv, which replies: We are not criminals

The People’s Republic of China, the world’s largest hijacker of journalists with more than 120 reporters or bloggers currently in custody, remained 177th out of 180. Journalists in prison in China, according to repeated complaints from Reporters Without Borders, face trials behind closed doors, without any safeguards protection their defense, and are subjected to extremely harsh detention conditions and real ill-treatment and torture. Sadly, the case of Zhang Zhan, a Chinese blogger – and lawyer – known for documenting the chaos and government responsibilities in Wuhan during the early stages of the Covid-19 epidemic in February 2020, is currently at the end of life. In prison after a hunger strike that made her weigh less than 40 kilos. Amnesty International has requested his “immediate release”, so that he can receive the treatment and medical care he needs, without which he “risks dying”. “He may not survive the winter,” the brother wrote on his Twitter account.

Athena is ready to “barter” for the Parthenon marble- Corriere.it