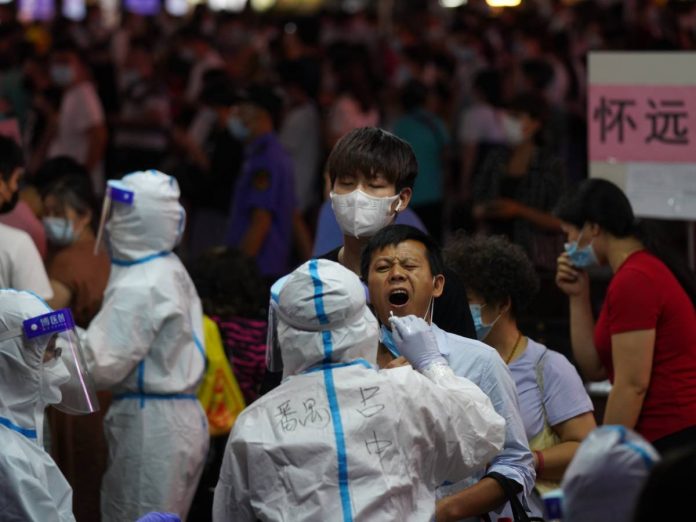 Now it’s official: China has fooled us twice about Covid. The first is by hiding its origin and spread, and the second by telling us that we have defeated it and developed effective vaccines. After the first lie has been denied, China is now dealing with the second great lie. But this second hurdle, which can be foreseen in light of Beijing’s recognition of the poor efficacy of vaccines, could be more complicated. Not only in terms of political image and credibility, but also in terms of structural and economic damage. In fact, the epidemic is spreading again in the heart of Guangzhou, Old Canton, the capital of Guangdong Province, which is the largest industrial development in terms of population and the highest level in the country, where many products destined for international markets are produced. As always, the Chinese authorities are trying to limit and contain the alarm. But the narration of events, no matter how sweet it may be, is not sufficient to hide the gravity of the situation.

And according to county authorities cited by the Global Times – a firmly allied English newspaper – the contagion is spreading in a “strong and fast” way. Preventive measures put in place to contain it are in place to confirm this. The Global Times reported at a press conference in which Chen Ying, head of local transportation, announced the closure of seven subway stations, 177 bus stations and the cancellation of 83 bus lines. All this while an order was issued to close schools and non-outdoor restaurants and residents of four areas of the city were separated at home. All this in order to detect five clear cases and 15 asymptomatic cases. It’s all officially due to the usual foreigners. Indeed, at the origin of the infection, there would be a 75-year-old who had returned from abroad after having been in contact with an Indian variant.

But the habit of reducing the spread of infection and attributing it to the infection that has developed in the rest of the world contradicts information reported by Western businessmen working in Guangdong Il-Journal. The first sign of a warning was much broader than that reported by Chinese government sources in a letter from Maersk. In the message on Friday to all of its operators, the Danish company, the world leader in container handling, explained that at Yantian Port “the situation continues to deteriorate after confirming new positive cases of Covid” and “all operations at Yantian Port”. »The western region of Yantian International Container Terminals has been suspended. This is not a temporary closure. “We expect – confirms the transmission – continued congestion at the station with delays of more than five days in a few weeks.” A terrifying scenario in both health and economic terms. The 155-kilometer distance between Yantian Port and Guangzhou is sufficient to demonstrate that the spread of infection is much wider and more widespread than the authorities admit. An exciting element for a province where the Guangzhou conglomerate’s merger project with nine other cities, including Hong Kong and Macau, has given rise to mega-cities of more than 70 million people that are now in danger of becoming an infection epicenter that is difficult to contain. The economic consequences risk being devastating no less. Guangdong, the starting point for the reforms launched by Deng Xiaoping in 1978, now contributes about 12 percent of China’s total economic output and is home to manufacturing facilities and offices of thousands of Chinese and foreign companies. Preventing it to contain the virus would be crippling the Chinese economy with financial consequences dozens of times worse than those it suffered when the virus struck Wuhan and Hubei Province.

See also  Astrazeneca, a vaccine against the South African alternative by the end of 2021. There are 141 million infections in the world, a record in India

The battle for Biden’s right to vote against the Republican wall...