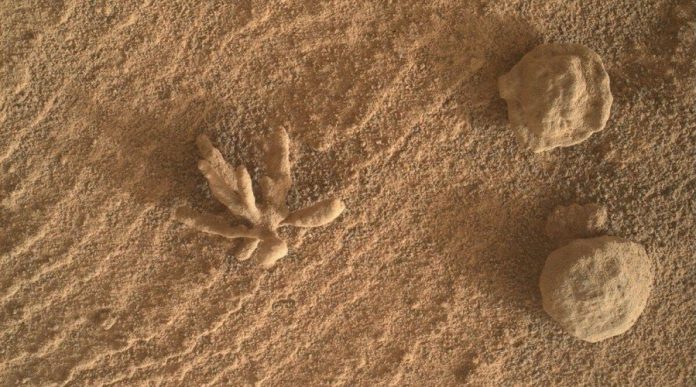 Live Science reports that the beautiful, centimeter-wide branched rock that looks a bit like a coral reef or a sponge, likely formed when water was still covering the Red Planet.

Curiosity captured the image of the mineral Venus, which looks like a living being, but is not alive, on February 25 near Aeolis Mons, also known as Mount Sharp – located in the heart of the 154-kilometre Gale crater on the red planet.

According to NASA, the metallic Venus was imaged using the onboard focus process, the Mars Hand Lens Imager (MAHLI) instrument aboard NASA’s Curiosity spacecraft. It was created by merging two to eight images previously taken by MAHLI, located on the turret at the end of the rover’s robotic arm.

“The flower-like rock, named Blackthorn’s salt, is a feature of evolution, or made of minerals that were deposited from ancient water that had previously been mixed with Martian rocks,” Abigail Freeman, planetary scientist and deputy project scientist for Curiosity’s rover, quoted by Live Science.

She added that the dynamic features found on Mars are similar in size but can have a branched shape, also known as dendritic shape, like Blackthorn’s salt, or be more rounded or even spherical, like other rocks in the same image.

It’s important to continue documenting new developmental properties such as Blackthorn’s salt because it can help researchers learn when liquid water disappeared from Mars.

See also  Twitter changed its font with a patented typeface

“We can learn more about the complex and long-term history of water at Mount Sharp,” Freeman said. She added that this could reveal more information about how long an environment can be habitable for life. Ian