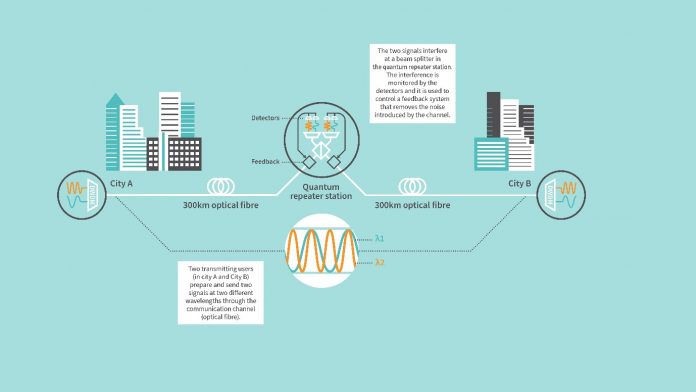 Cambridge Research Laboratory at Toshiba Europe today announced the first demonstration of quantum communication over optical fibers over 600 km in length. This breakthrough will enable long-distance, secure, quantum information transmission between urban areas, a major advance toward building a quantum Internet in the future.

The term quantum internet describes a global network of quantum computers connected by long-range quantum communication links. It is expected to allow for an ultra-fast solution to complex optimization problems in the cloud, a more accurate world time system and highly secure communications around the world. Several large government initiatives to build a quantum Internet have been announced, for example, in the United States, the European Union, and China.

One of the most difficult technological challenges in building a quantum internet is the problem of how to send quantum bits over long optical fibers. Small changes in ambient conditions, such as temperature fluctuations, cause the fibers to expand and contract, resulting in the mixing of fragile qubits, which is encoded as the phase delay of a weak optical pulse in the fiber.

Now, Toshiba has proven record distances for quantum communications by introducing a new “dual band” stabilization technology. This sends two optical reference signals of different wavelengths to reduce phase fluctuations on long fibers. The first wavelength is used to cancel out rapidly changing fluctuations, while the second wavelength, the same wavelength as optical qubits, is used for fine-tuning of phase. After publishing these new technologies, Toshiba has found that it is possible to keep the optical phase of the quantum signal constant to within a fraction of a wavelength, with an accuracy of up to 10 nanometers, even after propagating across 100 kilometers of fiber. Without canceling these fluctuations in real time, the fibers would expand and contract with temperature changes, scrambling the quantum information.

The first application of dual band stability will be long distance quantum key distribution (QKD). Commercial QKD systems are limited to about 100-200 kilometers of fiber. In 2018, Toshiba proposed the Twin Field QKD protocol as a way to extend the distance, and tested its flexibility against optical loss using short fibers and attenuators. Introducing dual band stabilization technology, Toshiba has now applied Twin Field QKD on long fibers and demonstrated QKD at a distance of 600 km, for the first time.

“This is a very exciting result,” comments Mirko Petaluga, first author of the article describing the results. “With the new technologies we have developed, it is still possible to extend more communication distance for QKD and our solutions can also be applied to other quantum communication protocols and applications.”

“QKD has been used to secure urban networks in recent years,” says Andrew Shields, Head of Quantum Technology at Toshiba Europe. “This latest advance extends the maximum extent of the quantum link, such that it is possible to connect cities across countries and continents, without the use of trusted intermediate nodes.” Implemented in conjunction with Satellite QKD, it will allow us to build a global network of secure quantum communications.”

Taro Shimada, Senior Corporate Vice President and Digital Director of Toshiba, explains, “With this success in quantum technology, Toshiba is poised to expand its quantum business very quickly. Our vision is a platform for quantum IT services, which will enable not only secure communications on a global scale, but also technologies transformational quantum computing such as cloud-based quantum computing and distributed quantum sensing”.

Details of the progress are published today in the scientific journal, Nature Photonics. The work was partially funded by the European Union through the H2020 OpenQKD project. The team is now designing proposed solutions to simplify their future adoption and deployment.

This latest development comes on the heels of last year’s announcement that BT and Toshiba would install the UK’s first quantum secure industrial network. Transferring data between the National Vehicle Center (NCC) and the Modeling and Simulation Center (CFMS), Toshiba’s multiplexing compatibility allows data and quantum keys to be transmitted over the same fiber, eliminating the need for costly dedicated key distribution infrastructure. The combined access of multiplexed QKD using the existing infrastructure for shorter distances, combined with Twin Field QKD for longer distances, paves the way for a commercially viable quantum secure global network.

QKD allows users to securely exchange confidential information (such as bank statements, health records, and private calls) over an untrusted communication channel (such as the Internet). It does this by distributing a shared secret key to the target users that can be used to encrypt, and thus protect, the information exchanged over the communication channel. The security of the secret key depends on the fundamental properties of the individual quantum systems (photons and light particles) that are encrypted and transmitted to generate the key. In the event that these photons are intercepted by an unidentified user, quantum physics ensures that target users can perceive eavesdropping, thus protecting the connection.

Unlike other current security solutions, the security of quantum cryptography derives directly from the laws of physics that we use to describe the world around us, and for this reason, it is secure against any future developments in mathematics and computing (including the advent of quantum computers). In light of this, QKD is expected to become an essential tool for protecting communications of operational importance to businesses and governments.

The sleeve holds the key to secure conference calls