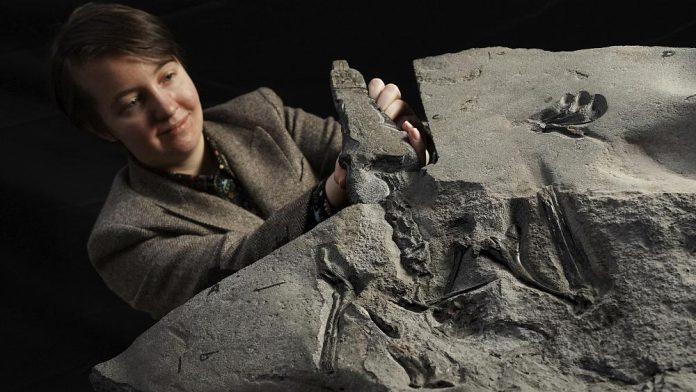 Scientists have discovered the fossil of a 170 million-year-old flying reptile known as a pterosaur on the Isle of Skye in Scotland.

The Scottish National Museum said the pterosaur fossil, more commonly known as a pterodactyl, is the largest of its kind ever discovered from the Jurassic period. The museum said that the wingspan of the reptile is estimated at more than 2.5 meters, which is similar to the wings of an albatross bird.

The fossil was discovered in 2017 by doctoral student Amelia Penny during a field trip on the Isle of Skye in remote northwest Scotland when she spotted a pterosaur’s jaw protruding from the rocks. It will now be added to the Museum’s collection.

“Pterosaurs preserved of this quality are extremely rare and are usually singled out for picking rock formations in Brazil and China. Natalia Jagelska, a doctoral student at the University of Edinburgh, who is the author of a new scientific paper describing the discovery, said, “However, the magnificently preserved enormous pterosaur emerged from the tidal platform in Scotland”.

Steve Brusatte, professor of paleontology at the University of Edinburgh, said the find is the best find found in Britain since the early 19th century when famous fossil hunter Mary Anning unearthed several important Jurassic fossils on the English south coast.

The fossil, he said, had “light feather” bones, “as thin as leaves,” and it took several days to cut them out of the rock using diamond-tipped saws while his team struggled against the tides.

“It tells us that pterosaurs got bigger much earlier than we thought, long before the Cretaceous when they were competing with birds, and that’s very important,” Brusatte added.

The pterosaur was given the Gaelic name Dirk Sjiatanach, which translates as “pterodactyl reptile”.

Pterosaurs were the first vertebrates to fly about 50 million years before birds. They lived until the Triassic period, about 230 million years ago. It was previously thought that they were much smaller during the Jurassic period.

Telegram picks up some of the best personalization features in WhatsApp...