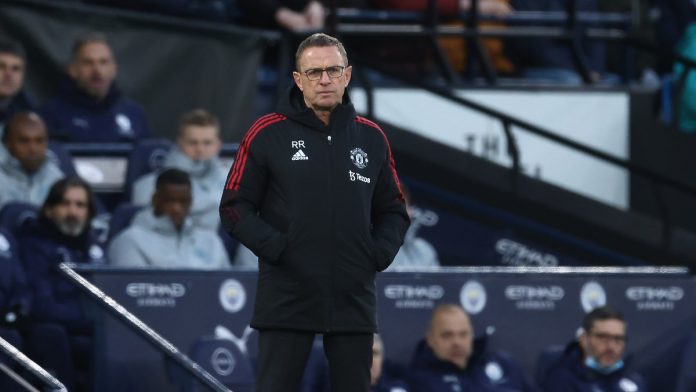 double pack
Man United go in the derby without Ronaldo

Manchester United desperately needs to score points in the derby against leaders Manchester City so that he does not lose sight of his goals. But things went differently: the team of Ralph Rangnick went without a chance.

Coach Ralf Rangnick suffered another setback with Manchester United in the Premier League. Without his superstar Cristiano Ronaldo, the English football record champion lost the prestigious city derby of the leaders Manchester City 1:4 (1:2). With just two wins in their last six league matches, Man United are increasingly struggling to qualify for the Champions League.

The outstanding Kevin De Bruyne (5/28 minute) and Riyad Mahrez (68/90), each with double shots, secured a well-deserved home win for coach Pep Guardiola. “We played well and really deserved the three points,” said De Bruyne, the pair’s top scorer. “In the second half we created more chances. We did that well. Today we showed that we are a good team.”

Former Dortmund player Jadon Sancho scored the equalizer for Man United, who were without strikers due to injury. In addition to Ronaldo, whose 19-year-old Anthony Elange was in the starting line-up, Edinson Cavani also missed the Red Devils.

Leaders Man City regained their previous six-point lead over second-placed Liverpool with a clear victory that could have been greater, but they have played a game more and will meet their pursuit head-to-head in April. Liverpool beat West Ham 1-0 on Saturday. “It’s about winning match after match,” De Bruyne said, explaining the defending champion’s style.

“They put us under pressure with their win yesterday and we reacted well. We always play the game we have to play. We are fighting for it and we will do that until the end of the season.” With a string of recent seven league victories in a row, long-time Jurgen Klopp’s Liverpool are back in the championship race after trailing by 11 points. In April there will be a live duel in Manchester.

Meanwhile, Man United fell to fifth in the table, surpassing Arsenal, who won 3-2 at Watford. Arsenal have one point more than Rangnick’s team and three games less. Only the top four in the final count qualify for the Champions League.

It’s a stated target Rangnick, who took over the squad, which he cemented with Sancho and Ronaldo pre-season, from Ole Gunnar Solskjaer to eighth in November. “We want to finish fourth in the league, and that’s the highest goal we can achieve,” Rangnick declared in February. “We definitely want to get to the Champions League, but it won’t be easy.” Now everything has become more complicated.