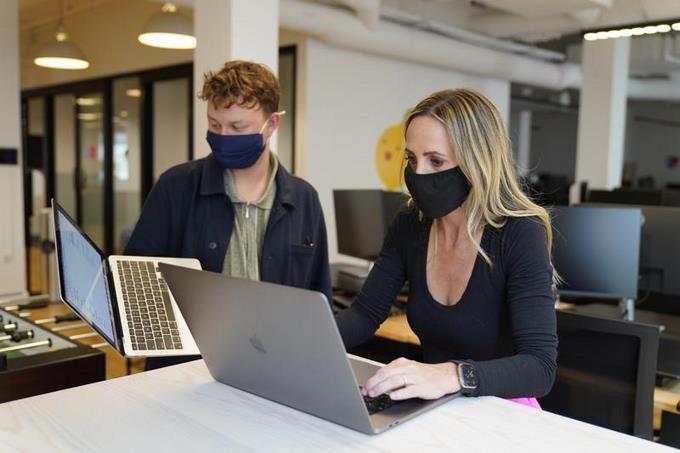 The tech companies that have led the way toward remote work in the wake of the coronavirus pandemic are now facing another challenge: how, when and even if they should order their employees to return to offices designed to encourage teamwork.

“I thought this period of remote working would be the toughest challenges of my career, but it wasn’t,” said Bernt Haider, head of staff at software company Salesforce, which has 65,000 employees worldwide. “Making everything work the way it should be more difficult.”

The return to offices was hampered by Delta’s version of the virus, which changed the plans of many tech companies, which were planning to normalize things on Labor Day, which is considered the end of summer in the United States. Microsoft has delayed returning to the office until October, while Apple, Google, Facebook, Amazon and many other companies have said they will wait until next year.

Given its impact on the management of other companies, it is expected that technology companies will be the ones that will determine the pace of return to the office. These companies’ next steps could determine how and where people work in the future, according to Laura Boudreaux, an associate professor of economics at Columbia University who studies everything in the workplace.

“The idea that remote work was temporary is long gone,” Boudreaux said. And the longer the pandemic lasts, the more difficult it is to get employees back into the office, especially if it’s full-time, he said.

Since they generally deal with digital products, most jobs associated with the technology sector are specifically designed for remote work. However, most tech companies insist that their employees should report to the office two to three days a week when the pandemic is over.

The main reason is that tech companies always say that the office generates a team spirit that produces new ideas and innovations, which might not have happened if everyone worked in isolation. That’s one reason tech companies have poured billions of dollars into perks-filled offices, encouraging them to get out of their cubicles and engage in conversations to generate ideas.

The impact of these policies may be overstated, according to Kristi Lake, chief operating officer of software company Twilio.

“There is no indication that this is really what is happening, but we all take it for granted,” Lake says. “You can’t go back to how you were before and tell people ‘You have to go back to the office or there’s no more innovation’.”

Twilio won’t return its employees to the office until at least early 2022 and plans to let most of them decide how often they should report to the office.

This hybrid office and telecommuting formula has been embraced by the technology sector, especially by the largest companies with the most employees.

Nearly two-thirds of the more than 200 companies that responded to a mid-July query in the Bay Area, which is home to a large number of tech companies, said they expect their employees to report to the office two to three days a week. . Before the pandemic, 70% of these companies asked their employees to work from their desks, according to the Bay Area Council, the organization that studies business policies that requested the ad.

Even Zoom, the Silicon Valley video conferencing service that has outstripped its revenue and inventory during the pandemic, says most of its employees prefer to work in the office only a few days a week. “There is no one size fits all when it comes to getting back into the office,” Zoom Director Kelly Steckelberg said in a recent blog.

The biggest tech companies, which have benefited the most from Zoom as the pandemic has made their services more indispensable, are still not giving their employees many options. Apple, Google, Amazon and Microsoft have made it clear that they want most of their employees to work together at least some days of the week to keep up with work and encourage innovation.

This policy seems pretty outdated to Ed Zitron, who runs a PR firm representing tech companies and has embraced remote work since his founding in 2012.

He argues that the only reason to have an office is to satisfy superiors who want to have people under one roof “so they can see their faces and feel good about the people they have…so they can enjoy the power that you have.”

The hybrid formula is perfect for people like Kelly Soderlund, a mother of two who works out of offices in San Francisco and Palo Alto, California, for travel management company TripActions, which has about 1,200 employees worldwide. He couldn’t wait to get back in the office when the company partially reopened in June, in part because he missed the separation between his professional and personal life.

“When I don’t have it, I get up in the morning, go to work, and take the kids to kindergarten,” Soderlund says. “I come back and work, until I have to go pick them up. I make dinner and go back to work. It’s like working all day.”

The commute to work takes Soderlund an hour, who says he wastes time when he has no obligations.

Soderlund believes the office encourages collaboration, although she admits the pandemic has shown that you don’t have to go to the office every day for teamwork.

The camaraderie and the need to separate work and home are two of the reasons employees at business software company Adobe return to the office, according to Gloria Chen, chief of staff at one of Silicon Valley’s oldest companies.

Bots, responsible for ‘cutting off’ Musk on Twitter – El Financiero