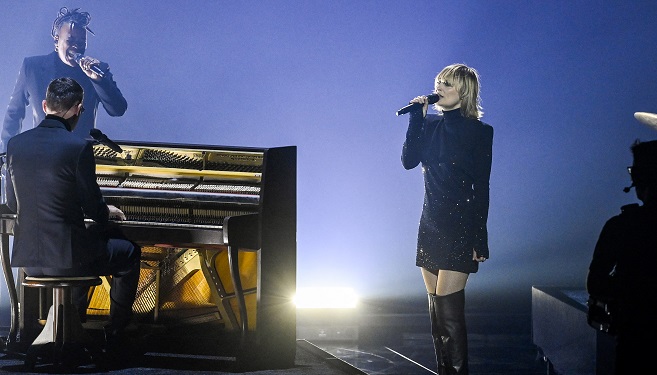 This is the first time that Belgium has once again reached the final of an international music competition since Blanche and the “City Lights” title in 2017.

Hooverphonic gave a flawless live show in Rotterdam on Tuesday night. The group, brought back by original singer Jake Arnart, presented the song “The Wrong Place” written by Alex Callier and Charlotte Furrett, winner of “The Voice Belgium.”

Wearing a bright black dress with a low neckline behind designer Tom Iribot’s back, Jake Arnert was in the middle of a dark and simple scenography imagined by Hans Pannekoek. This sobriety contrasts with the many other colorful and sassy performances during the evening.
The Belgians convinced the jury, based on the first performance during Monday’s dress rehearsal, that viewers could vote remotely. Their vote makes up 50% of the decision, just like that of a jury.

The other translators who qualified after the first semi-final are part of the delegations from Lithuania, Sweden, Cyprus, Azerbaijan, Ukraine, Norway, Israel and Malta.

Australia, which has participated in the competition since 2015, was unable to reach the final for the first time. Singer Montaigne was not present live due to the health measures and instead uploaded a video of her performance.

Ten other countries will participate in the second semi-final round Thursday evening. Germany, France, Italy, Spain, the United Kingdom and the host country, the Netherlands, are advancing directly to the final, which will be held on May 22.

The competition is taking place at Ahoy Arena in Rotterdam where only 3000 people are allowed to attend. The audience must remain seated and wearing a mask is mandatory. Each participant must have tested negative for Coronavirus or they may have already been vaccinated.

Last year, the Eurovision issue was canceled due to the coronavirus pandemic. However, Hooverphonic has participated in an online alternative. The title “Release Me”, presented by singer Luka Cruysberghs this time, has been defended. The latter has since been replaced by Geike Arnaert, the legendary singer of the lineup from 1997 to 2008, who returned to the group in 2020.

This is what Goku, Vegeta, Gohan and other characters will look...