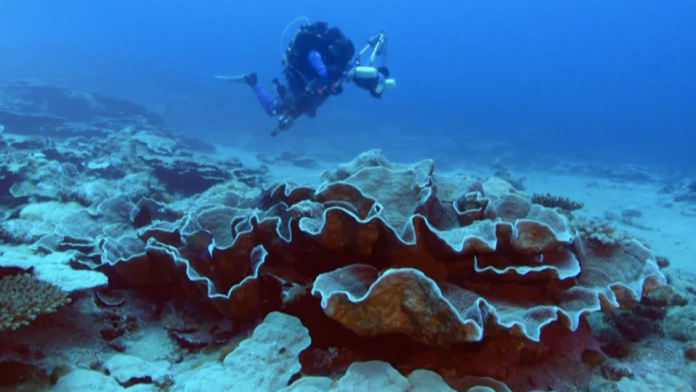 This healthy rose-shaped coral reef is an important find. It is 3 kilometers long, 30-62 meters wide, and 35-70 meters deep. Some giant corals are two meters in diameter.

“It is one of the largest coral reefs in the world with a depth of more than 30 meters,” said a UNESCO press release, at the start of the scientific mission that led to the discovery.

A scientific research expedition supported by UNESCO has discovered one of the largest coral reefs off the coast of Tahiti.

This unique discovery is a step forward for #Science !

“The immaculate condition of the rose-shaped coral reef and the extent of the area it covers make this a very unusual find,” UNESCO said.

The expedition took place in November 2021 thanks to scuba gear selected to allow such a deep landing. “The team conducted dives that took about 200 hours to study the reefs and were able to watch the reefs spawn,” UNESCO said.

In contrast to the near-surface corals in French Polynesia that experienced a bleaching bout in 2019 that also suffer from fierce starfish attacks, those on this reef are well preserved and healthy.

“These corals do not show signs of stress or disease,” marine biologist and coral reef specialist Letitia Hedwin of CNRS and CRIOBE told AFP.

In order to better understand why these corals are not clearly suffering from climate change and their population dynamics, temperature sensors have been placed in the area for long-term monitoring.

As Laetitia Hedwin notes, “This discovery also raises the issue of taking these deep areas into account when developing MPAs.”

“The state of knowledge of the oceans is still limited, as only 20% of the sea floor on the planet is mapped (…)”, confirmed by UNESCO.

The report says there will be one next month