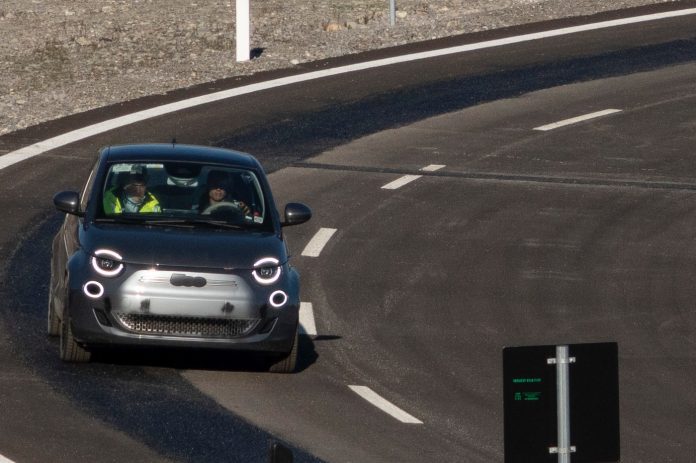 We know the principle of induction charging for smartphones. Why isn’t this technology adapted to electric car drives? Stellantis gave it a try, and it worked!

The specially-equipped Fiat 500 drove at high speed on the Arena del Futuro without draining its battery. The track, which is located near Chiari in Italy, is run by direct current. Technology developed by Stellantis and its partners transfers energy from the asphalt to the car, much like a Qi mat to a smartphone.

From the asphalt to the engine

So the driver no longer has to stop to recharge his car, and there is no need to fear the repercussions for his health: measurements of magnetic field strength prove that it does not affect the driver and his passengers.

The technology in question is called DWPT (for “Dynamic Wireless Power Transfer”), which consists in laying loops under the asphalt. It “wirelessly” charges electric vehicles traveling on specially equipped, designated routes. The DWPT system can be adapted to all vehicles (passenger cars, trucks, buses, etc.) that are equipped with a specific receiver that transfers power from the road infrastructure directly to the electric motor.

This is another advantage of this system, which does not recharge the battery but supplies the motor directly. In this way, this extends the range while retaining the charge of the car battery, which should be avoided by limiting the number of recharge cycles.

Obviously, if this test were encouraging, the cost of equipping all road infrastructures with electric coils under the asphalt would be quite prohibitive. However, this technology can be interesting for sections on the highway or for public transport that makes the same trips.

The Twenty-Sixth Conference of Central Bank Governors of French-Speaking Countries was...