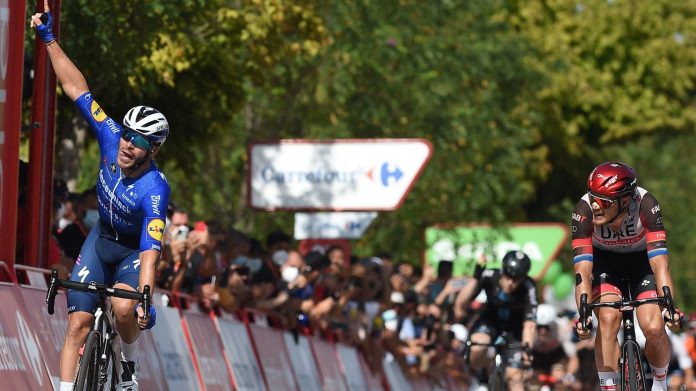 The 13th stage was promised to the sprinters and it took place on Friday 27th August at Villanueva de la Serena. Except Sprint did not go as planned. When he started Fabio Jakobson, Dzonink quickly exploded the entire Ploton train … including Jakobson!

The Dutchman was unable to keep up with his team, which suffered from a technical problem, and the Belgian team finally fell on pilot Florian Sanachal. The Frenchman took his chance with a firm hand and dominated Matteo Trend (UAE-Team Emirates) in the sprint. Sanachal’s first victory on the Grand Tour and his first French victory at this Vulta.

With the green jersey on his shoulders, two kilometers from the back of his pilot fish, Fabio Jakopson was heading straight for his third win in this Vulta. But the condition of the irreversible Volda, it is not the position of the Volda. Absolutely unexpectedly, the Dutchman was released by his own team, which set the pace of hell as they approached the finish line. Although he had no legs, the green jersey was unable to preserve its colors, much like the bellows that exploded under the pedal of the Belgian creation.

Without its designated sprinter, Dzonink quickly fell on the Frenchman Florian Sanachal in the role of pilot fish. I have to say that the Frenchman took advantage of the opportunity. In front of Italians Matteo Trentin and Alberto Dinez (Team DSM), Florian Sanachal, 29, threw his bike into the finish line next July, giving his full strength to win his entire Grand Tour.

A set win for the French, of course not thinking about raising their hands in the finish line on the morning of the 13th stage: “We worked well for Jacobson and I was told it was fast. I didn’t realize it. I told myself that Arnaud Tamare was going to overtake me or Matthews. No one. I’m lucky.” You may be lucky, but today is the best of all.