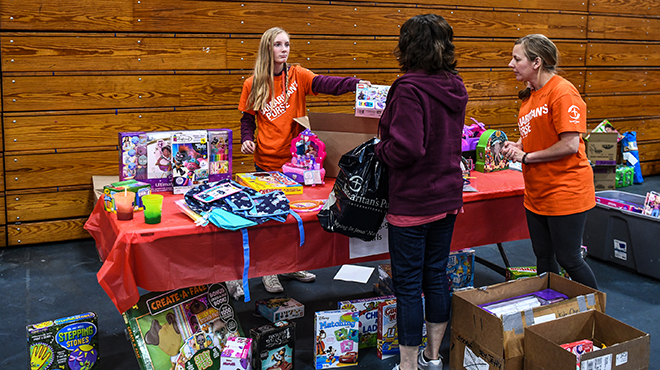 Food, Hot Drinks and Soon Gifts: The unity was in Mayfield on Christmas Eve, a city in Kentucky where dozens of people were killed by a hurricane two weeks ago.

“We’ve trying to make it Christmas” Jimmy Finch, who arrived with his big mobile barbecue in his old red pick-up the day after the tragedy from neighboring Tennessee, explains to the citizens. In the bitter cold of December, he explains his magic to help Mayfield: “One thing at a time, one sandwich at a time”. “I do not count the number of people we have fed. We encourage everyone to come back.”, He says.

In a large parking lot opposite the first United Methodist Church in Mayfield, the Yellow Marquee was set up by the volunteer Minister of Scientology, which is affiliated with the Church of Scientology. “We try to make sure everyone eats because it’s a very difficult time for everyone.”Says Chad Adams, one of the volunteers sent to Mayfield.

He estimates the group has distributed about 30,000 meals since the December 10 disaster, and invites everyone to come and have a coffee, hot chocolate or donut while waiting for the toys to arrive, he promises. At least 79 people have been killed in a series of hurricanes in the United States between December 10 and 11.

Mayfield was the epicenter of the catastrophe and is only now being seen “A bunch of matches” The next day the city mayor described it.

The Maryland man won the $ 2 million lottery prize for...