Persia Digest
Home World He returns it and collects the grand prize. But the mystery... 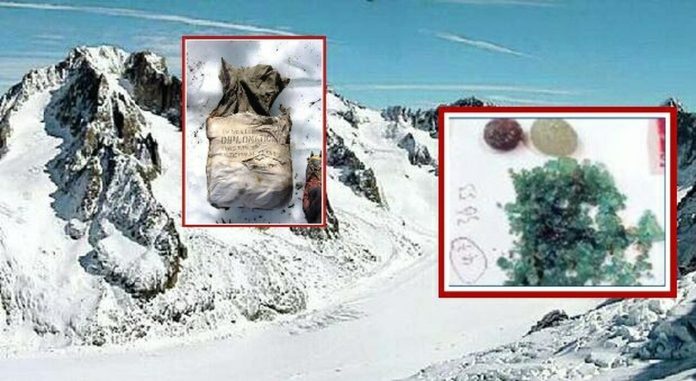 Rafael remembers well the morning of August 11, 2013: “I like to climb glaciers, I left the house about 5, I got to the moraine, I knew it was the place where some planes crashed many years ago and that always there were scraps and sheets of metal. I was crossing the river glacier and saw a stone: it looked like jade, and I put it in my pocket, and then after a few meters I saw a metal box, without a lid, full of sacks, and I opened one, which was, I suppose, full of precious stones, a sapphire.”

On that day, Raphael found Kangchenjunga’s treasure, an Air India Boeing 707 that crashed into the Bosons glacier, just below the summit of Mont Blanc on January 24, 1966. 117 people died. On the same wall, another Air India plane, Bombay – London Malabar Princess, crashed on November 3, 1950, killing all 48 passengers on board. On August 11, eight years ago, Raphael returned to his home in the Tarentes Valley and thought about it for 10 days, then decided to bring his treasure to the gendarmes: “What could I do, bury it in the garden? Sell it in Antwerp? It’s not mine. I said in Myself: I’d better be honest.” In the end, the honesty paid off, at least in half. A week ago Rafael recovered half the value of this fund: 150 thousand euros. The other 150 thousand, as required by law, will go to the municipality where the found Treasure, ie, the municipality of Chamonix.

It didn’t take eight years of investigation to find an heir. For the connoisseurs without a doubt: the gemstones, almost all of which are rubies and emeralds, came from India (these are inscribed on all bags made in India) and were the property of a passenger on Flight 101 Bombay-New York that crashed in 66. Chamonix mayor Eric Fournier said, “No less than ten heirs of the victims of that voyage have appeared in recent years in an attempt to prove that the stones belonged to them, but in the end it turned out that they were all false.” Instead, the municipality would like to display the treasure and enrich the town’s crystal museum. “We will tell the story of these stones – this way we will honor the victims,” ​​said the mayor.

Who were those emeralds and those sapphires? Why were they on that trip? The metal chest found by Rapahel is just the latest in a series of puzzles that have always covered the two crashes on Mont Blanc. In Kangchenjunga, which crashed in 66, there are still many points in particular that will probably never be made clear. On board was traveling Homi Bhabha, the father of India’s nuclear programme. His bag was found years later but the plane’s black box was never found. vanishement. There were rumors of a NATO plane colliding. A reporter claimed to have found evidence, an aircraft piece that could not belong to any of the Indian aircraft. For years, that glacier that descends almost to Chamonix, on the French side, has brought back the remains of the souls ended in those accidents, human remains, clothes, documents, and photographs.