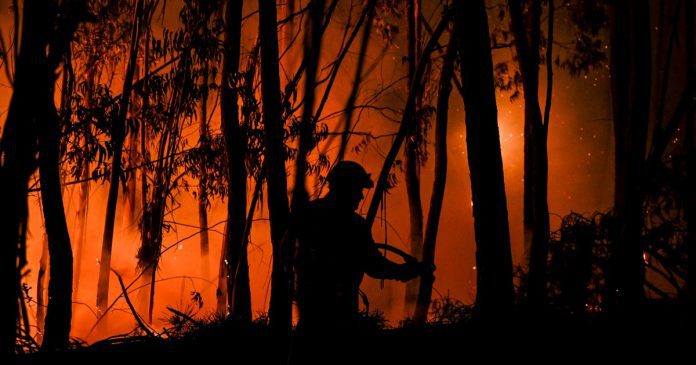 Around 2,800 firefighters battled numerous forest fires in central and northern Portugal on Sunday. Some of the fires have been active since Thursday, with about 40 people injured, according to civil defense. Due to heat stress, the government has ordered the rescue workers to be on high alert.

About 250 forest fires were reported on Friday and Saturday. A huge fire has been burning in the Ourém region, north of Lisbon, since Thursday. 700 firemen are stationed there alone. According to initial estimates, at least 1,500 hectares of vegetation and two houses were destroyed in the fire. More than 700 soldiers were sent to the area.

A little further north, another fire has been burning since Friday in the municipality of Pombal, which borders Leiria and Santarem districts. There 450 firefighters fought and extinguished the fire.

About 40 firefighters and civilians were injured. Most had to be treated for smoke inhalation or exhaustion, National Commander for Civil Protection Andre Fernandez announced Sunday evening. Temperatures will soar above 40 degrees this week, and it will get even hotter in the coming days.

Portugal Prime Minister Antonio Costa cancels visit to Mozambique His government called for the activation of an EU civil protection mechanism. Portuguese emergency services were then able to return to the two firefighting planes stationed in Spain.

“We are facing an almost unprecedented weather situation,” National Civil Defense Commander Andre Fernandez said on Saturday. Scientists are seeing a link between climate change and extreme and frequent weather events like heat waves and wildfires.

Alexander Sverrev after defeating Lloyd Harris in the 16th round

Speech from the Throne: Elizabeth II, replaced by Charles, was (slightly)

TikTok promotes US book sales through the #BookTok trend