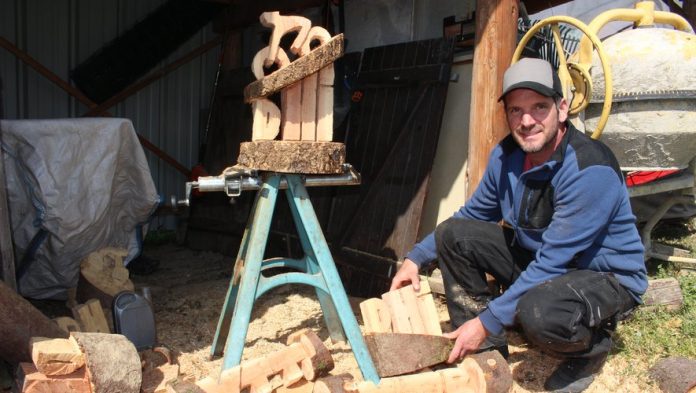 primary
Etienne Massu will animate the Mountain Bike World Cup Village by creating chainsaw sculptures. He is also the author of the awards to be awarded.

If some people polish and polish their sculptures to give them a glossy side, Etienne Massu values ​​nothing more than raw ‘country’ fir wood. For over five years, he’s been making chainsaw carvings from reclaimed wood.

Totem banners, gates, the coat of arms of a brand… and this year, the Downhill Mountain Biking World Cup awards, including the award for a super fan who still spends his time at his home in Loucrup.

A job that requires precision and technique, which he nonetheless finds easy to achieve – unlike those around him. It must be said that he regularly uses this tool as part of his work. He teaches the youth at IME Campan how to deal with it, as he is a technical teacher of green spaces.

“Mountain bike and chainsaw go together”

The person who is a member of Lourdes VTT designed his first pieces for friends, first names engraved into the trunk, gifts for wedding, housewarming party…Then he diversified his business and by displaying it, won his first professional order: the coat of arms of the Commençal MTB brand.

Etienne Massu smiles: “The mountain bike and the chainsaw go together. In downhill cycling, fans make noise with it.”

Since the instrument is part of folklore, when he was offered to volunteer at the World Cup, the president of Lourdes VTT, Patrice Borderer, asked him to make the awards. But also to move the village by doing a demonstration on the spot. So you’ll be able to see him sculpt live on Saturday and Sunday.