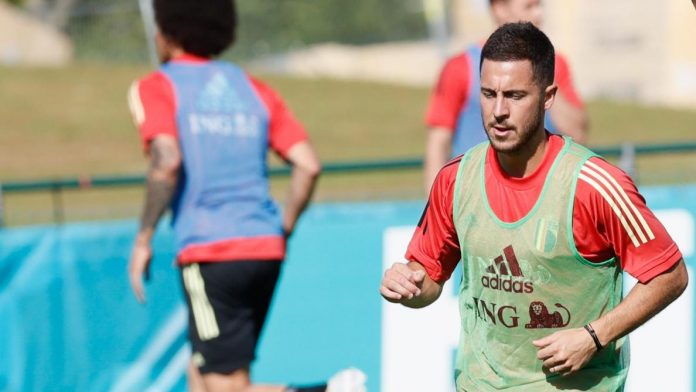 The captain of the Red Devils spoke to RTBF on the eve of the team’s departure to Russia, where their first match in the tournament will take place.

TheThe Red Devils’ Euro starts in two days against Russia, with departure for St Petersburg on Friday morning. With that deadline approaching, Eden Hazard was a guest on the RTBF 1pm newscast to give the latest news from the team, but especially himself.

“We can’t wait to start competing,” said the Red Devils captain. “We had two weeks of good preparation. Now is the time to start things right. In a couple of days we have the first match. We will start entering the competition, we want to play and win matches. Preparations are starting to finish and I hope everyone is ready for the first match.”

If it’s mentally okay for Hazard, physically, it’s still not clear. The Real Madrid player had a season disrupted by injury and played just 10 minutes against Croatia on Sunday in the last friendly match. What to worry about with the first team game on Saturday? “I did a whole week of training. We will see with the medical staff what I will do in the first match. At first it will be the choice of the coach, but I am not yet 100%, so we will see what we do.”

The Red Devils have been occupying first place in the FIFA rankings for several months and third in the past World Cup, and are now among the favorites for the final victory in the European Championship. “Now when we play with the Red Devils, we always have that pressure above us,” Hazard admits. “From what we have done in the past, people are still waiting for us to do better. We did something great 3 years ago in the World Cup. We will focus and try to do better. We know the potential we have in the team. We know where we can go.” We go. So we will try to go as far as we can.”

In the event of the coronation on July 11, Hazard does not hide that the Devils will “celebrate a few days”. Then we will go on well-deserved vacation. And then we’ll do what a footballer does, we’ll be back for next season and ready to try to win over and over again. “

This Euro will necessarily be special due to the healthy context. Players will have to isolate themselves from their families for the duration of the competition. “All of my family have said good luck to me, trying to go as far as possible and I hope we can see each other. We are always used to having families with us, and it’s not possible, so we deal with it and adapt. Now with technology we can still see The kids are on the phones so they won’t be there but they will be in our hearts.”

As for his future in the Red Devils shirt, Hazard has remained elusive, and it is clear that he does not want to delve into the subject at the moment. “I don’t know, we’ll see,” he said simply.