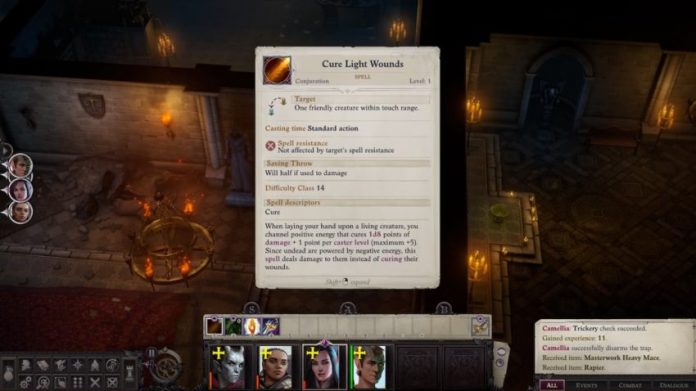 Damage during battle is inevitable, but there are a few different ways you can tackle characters in Pathfinder: Wrath of the Righteous

One of the easiest ways to recover hitpoints in the heat of battle is to have the wizard-focused party member cast a spell. Whether Turn Based or Real Time Combat mode is selected, the player can select a healing spell from that character’s attack list. Although effective, there is a limit to the casting of each spell and only the wizard can heal the members of the group one by one. According to the healing RPG mechanic, there are a few different variations of healing spells available, depending on the player character’s level. The higher the level of the healing character, the more hit points the spell will return. Storing healing potions is also an effective way to recover during battle or after a battle. You’ll be able to access those in your inventory and then put them from the common stash list in each character bag.

The quickest and most effective way to get your entire HP set back at once is to have them rest. The player can do this either by finding a place to sleep (such as a tent), or by pressing the R button. This will cause the player to camp somewhere on your screen. While selecting group members, right-click on the temporary camp and it will give the player the option to start resting the entire party, as well as a recommended rest time. Rest not only allows party members to recover vital points, but also helps heal the negative effects the spell has on a party member.