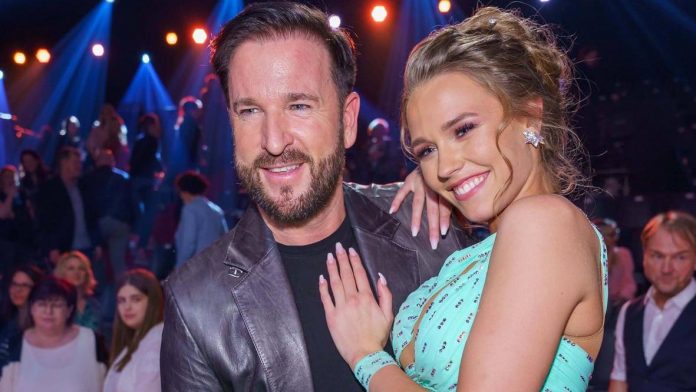 To celebrate the day, she gave her fans a new photo: Laura Muller woke up from her digital slumber and posts a photo with her husband Michael Wendler. The couple celebrates their first wedding anniversary.

Laura Mueller, wife of scandalous singer Michael Wendler, hasn’t posted anything about herself for months. As a result, she lost quite a few followers, did not share any advertisement, and everyone asked themselves: “What is Laura doing?” Now you finally know again what a 20-year-old would do. She first reported a photo of her puppy dog. Then there was another selfie and now finally the big romantic picture with your loved one. The reason for this is that Laura and Wendler have been married for a year.

Laura and her husband kiss each other, holding their little black puppy in their arms. Laura in a blue and short dress, Michael a little more elegant in a light blue shirt and dark suit pants. Laura wrote about the photo: “I love you forever.” “The first wedding anniversary and three!”

Adeline Norberg is happy for her father

The former “Playboy” cover photo model has activated the comment function, but despite more than 30,000 likes, there are only two posts under the post. “My Husband” including the same heart eye emoji, plus one from Adeline Norberg, Michael’s daughter and Laura’s BFF. She writes “Very nice” under the picture of her father, who has just fallen in love.

Before he married the younger Laura Muller, now called Norberg, he had been married to Claudia Norberg since 2009. The couple had been together for 29 years before the “Anyway” translator entered into a relationship with Laura.

See also  Madonna: Her son Rocco uses a pseudonym to sell his paintings at exorbitant prices

Releases: “Wrath of Man” is a super fun and powerful movie