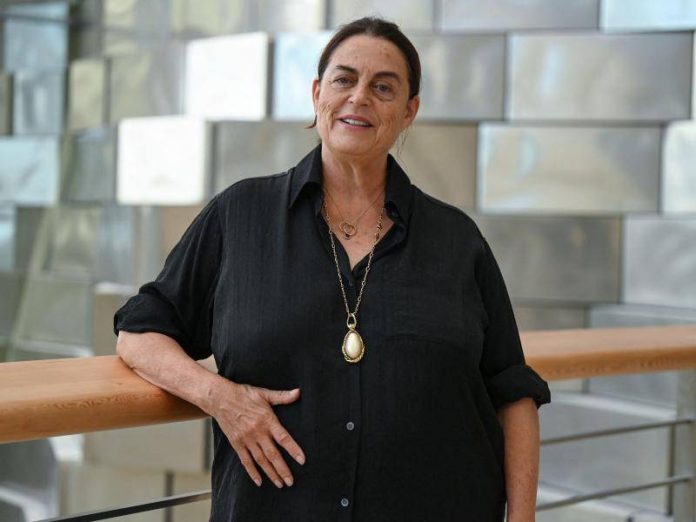 About 11,000 aluminum boxes reflect the sky and sparkle like crystals in the sunlight of southern France. They adorn the facade of the 56-meter-high tower designed by star American architect Frank Gehry, which rises above the roofs of Arles.

The stunning building is part of Swiss billionaire Maga Hoffmann’s massive LUMA exhibition complex, which opened its doors on Saturday.

The unique project officially dates back to 2014, when the foundation stone for LUMA Arles was laid. But the plans and concepts go back much further than that. Co-heiress to the pharmaceutical company Hoffmann-La Roche, born in Basel in 1956, is an avid collector. And not just from yesterday.

She was already collecting contemporary art while studying cinema. At the end of the nineties, she began producing several art projects in cooperation with artists and institutions. She said that the idea of ​​a place for creativity and exchange between artists, intellectuals and scientists gradually emerged.

What she called “a utopia for a cultural institution for the 21st century” at the start of LUMA – the name is an artificial word for the first names of her two children, Lukas and Marina – is now a reality. For more than ten years, the businesswoman and documentary film producer has created a huge complex with several exhibition halls, an artist’s residence, a park, a café and a restaurant in the Parc des Ateliers in the center of the city, attracting attention. Including the amazing Jerry Tower.

The striking sculptural architecture typical of Gehry initially caused controversy. Meanwhile, the nine-storey leaning square tower became a place to take pictures. Its exterior plays the light of Provence, within elegant spiral staircases and galleries that open up fantastic vistas.

His installations are not buildings, but sights. For Maja Hoffmann they are art. The patron explained that she was looking for an architect who was an artist. The cost of the Gehry Tower, which is intended to commemorate the limestone cliffs of the rocky Alpilles in front of Arles, is estimated to be up to 150 million euros.

She explained that architecture and art are two forms of design that reinforce each other if coexistence occurs at the right time and under the right conditions. Thus artworks are an integral part of the Gehry Tower, such as Karsten Haller’s “isometric slides” in the entrance area, a tall metal slide, and the massive rotating ceiling mirror designed by Olafur Eliasson.

The main exhibition areas of the 15,000 square meter building are located in the basement. At the opening, works from the LUMA Foundation / Maja Hoffmann Collection will be on display as well as exhibits from the collection of the Emanuel Hoffmann Foundation, founded in 1933 by her grandmother Maja Hoffmann-Stehlin. She herself founded the Swiss LUMA Foundation in 2004 to promote interdisciplinary projects in the fields of art, culture and human rights. Human, environment, education and education.

It acquired the 11-hectare site in 2010 for about ten million euros. The buildings and five halls of the Parc des Ateliers – formerly a French railway repair shop – have been reconstructed and reconstructed. Some of them were opened to the public earlier, for example on the occasion of the Rencontres d’Arles, one of the most important photography festivals in the world, which they co-finance.

LUMA Arles is a think tank for culture and the environment. Architecture, art, research and environmental protection are intertwined here. The LUMA operator, a kind of design and research lab, is located in one of the buildings. More than a dozen employees are looking for local resources to develop new, less polluting materials. Some were used in Gehry’s Tower, such as the slabs from the Camargue Salt, the nature reserve south of Arles.

The massive, interdisciplinary artistic and cultural project honors her father, so to speak. As a zoologist, Lukas Hoffmann established the La Tour du Valat biological research station in the Camargue to protect the Mediterranean wetlands. He was a founding member of the WWF (World Wide Fund for Nature) and Vice-President of the International Union for Conservation of Nature (IUCN). In 1994, he created the Mafa Foundation for Nature Conservation – named after the first names of his four children Maja, Andrei, Vera and Dashenka.