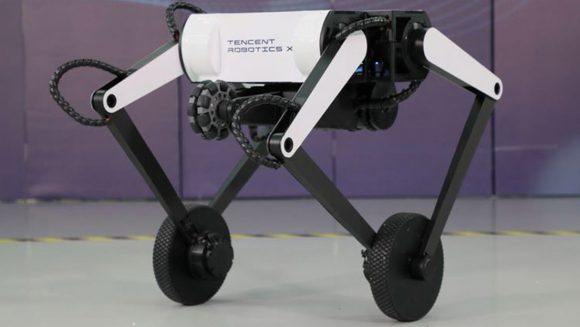 Laboratory Robotics X, affiliated with Chinese technology giant Tencent, presented this week as part of an international conference on robotics and automation being held in the Asian country. a A robot with two feet on wheels that can flip forward, CnTechPost portal reports.

This is preliminary, based on nonlinear control, dynamic control, and path planning techniques. This prototype can adapt to uneven terrain and overcome obstacles, among other actions. He is 35 cm tall, but It can jump up to 60 cm high.

Thanks to the shock absorbers and the flexibility of its limbs, the robot can go down a ladder or move on uneven surfaces with its “legs” at different heights. In addition, Ollie maintains stability even after severe impact. It has a third “leg” under the body, which helps it maintain balance and provides angular momentum for acrobatic maneuvers, such as a 360-degree forward spin.

Also, the robot has the ability to plan a trajectory before making a movement, thus improving the performance of its joints. It is not known if Tencent intends to start mass production of this prototype.

In the video, Oli’s stunts

(With information from RT)