Persia Digest
Home science More than 70 loners in the galaxy: Dozens of starless planets have... 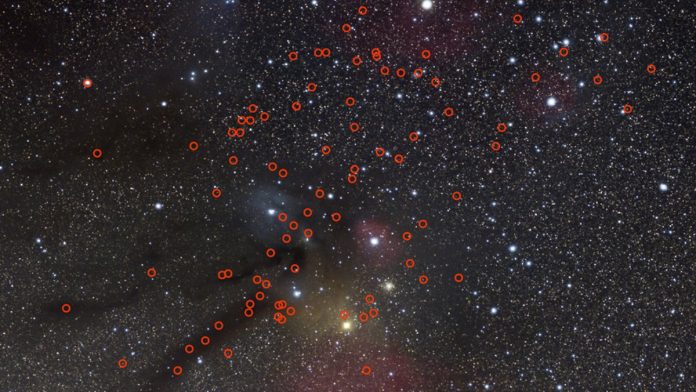 More than 70 lonely people in the galaxy

Dozens of starless planets have been discovered

As a rule, the planets revolve around the stars, just as the Earth revolves around the sun. But now and then astronomers hunt down the loners. A research group has now discovered at least 70 stray exoplanets – and possibly billions of them are in the Milky Way.

An international group of researchers has identified at least 70 stray exoplanets that do not orbit a star. Scientists found these loners in the star-forming region of the constellation Scorpio and Scorpio. This discovery could help explain the origin of these nomads, writes the team led by Noria Merritt-Roig of Laboratoire de Astrophysics in Bordeaux (France) in Nature Astronomy.

“We didn’t know how many we could expect and we’re glad we found so many,” Merritt Roig was quoted as saying in a message from the European Southern Observatory (ESO). Because without a major star to illuminate them, exoplanets are difficult to detect. Only in the first 10 million years after their formation did planets with a mass of 13 times Jupiter and up to 13 still be so hot that they glow. Therefore, it can be found with the help of large telescopes.

Up to 170 lonely planets

Merritt Roig and her colleagues were able to discover up to 170 individual planets. There is a great deal of uncertainty because the transition to brown dwarfs is liquid. Brown dwarfs have 13 times the mass of Jupiter, but they are too small for nuclear fusion to begin like stars. Due to mergers occurring at temperatures much lower than inside the Sun – about 15 million degrees Celsius – brown dwarfs radiate weakly.

In order to differentiate between lone planets and brown dwarfs, the masses or ages of celestial bodies must be known. However, the researchers only had the apparent brightness – the size – of the objects and the approximate estimated age of the star-forming region in question.

Example: A celestial body of magnitude 16 is assumed to be a solitary planet if it is not older than ten million years, but is likely to be a brown dwarf if it is much larger than that. Because the glow of young planets diminishes with age.

Scientists have evaluated more than 80,000 images taken over 20 years. “We measured the precise motions, colors, and brightness of tens of millions of sources in a large area of ​​the sky,” explains Miret-Roig. These measurements would have made it possible to identify the faintest objects in this region, the lone planets, with a high degree of probability.

There are various theories about the origin of these reclusives. Based on statistical analysis of the objects found, researchers estimate that there were two mechanisms underlying for the most part: either the gravitational interaction within the solar system that led to the lone ejecta; Or the collapse of a gas cloud that was too small to lead to star formation. But astronomers don’t rule out other mechanisms either.

They assume that there are many starless planets. “There could be billions of these free-floating giant planets roaming the Milky Way without a mother star,” says project manager Hervey Boye of Laboratory Destrophysics in Bordeaux.

A year ago, scientists from the University of Warsaw reported the discovery of a planet roughly the size of Mars, and perhaps also not orbiting a star. They discovered the object OGLE-2016-BLG-1928 through the so-called microlensing effect, which was predicted by Albert Einstein in his General Theory of Relativity. The rays of light from the star are bent by a celestial body far in front of it so that the star appears brighter. Some exoplanets orbiting a star have already been discovered through impact.

This is why the new PS5 version is lighter and hotter

Minimum and recommended configuration on PC