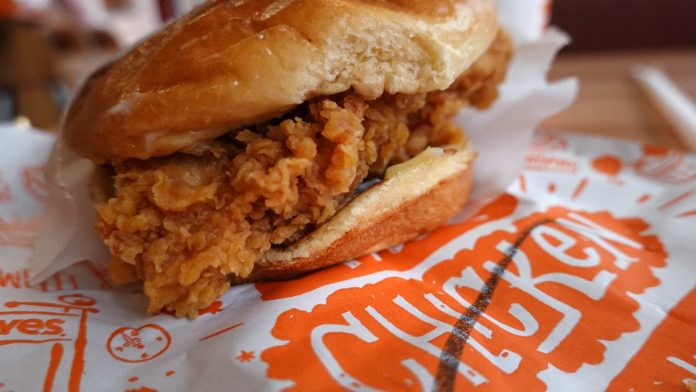 The French restaurant group is relaunching the American restaurant chain Popeyes in France after it failed to launch in 2018.

Catering group Buffalo Grill, which has acquired Courtepaille restaurants and combined the two brands under the “Napaqaro” brand, an acoustic rewrite of the “checkered tablecloth,” will relaunch the American fast food franchise in France next year. Made with Popeyes Chicken, announced Wednesday.

“We will start in the second half of the year with the opening of our first restaurant in Paris,” Jocelyn Olive, president of Napaqaro – a name created last month – explained to AFP, which has acquired the exclusive development of the franchise. Franchise “) from Popeyes to French territory.

The ambition is to open “five establishments in Ile-de-France at the end of 2022” and to continue at the rate of 50 openings per year “in order” to build a restaurant garden that will very quickly reach hundreds of “units in France”.

Born in 1972 in Louisiana, this brand is already present in Spain, Great Britain, Switzerland and Turkey in particular, and is a “real social phenomenon in the United States with 3,500 restaurants and a very special recipe for chicken marinated in spices for 12 hours,” says Jocelyn Olive, who ran Burger King France before joining Buffalo Grill in 2018.

The brand, which wants to be “familial and popular” with menus ranging “maybe €6-9”, will offer chicken “always fresh and 100% French” fillet, legs or wings “hand-baked in French flour and then fried by chefs and not in an industrial way” .

See also  Venmo, a Paypal affiliate, has also started allowing the use of cryptocurrencies

Thus Napaqaro acquired the “master franchise” that the Lodarest group had relinquished: in February 2018, Popeyes Louisiana Kitchen together with Lodarest opened the first restaurant in France near Toulouse, then two more, one in Montpellier and one in Blagnac, and announced an ambitious restaurant development plan.

But after differences in strategy with the head of the network, Lodarest has switched these three establishments to the colors of its own burger brand, the Independence Burger.

Backed by its shareholder TDR Capital, Napaqaro, which includes 600 restaurants – 360 Buffalo Grill and 240 Courtepaille brand, acquired at the end of 2020 – in January 2021 launched its “Bun meat bun” delivery burger brand.