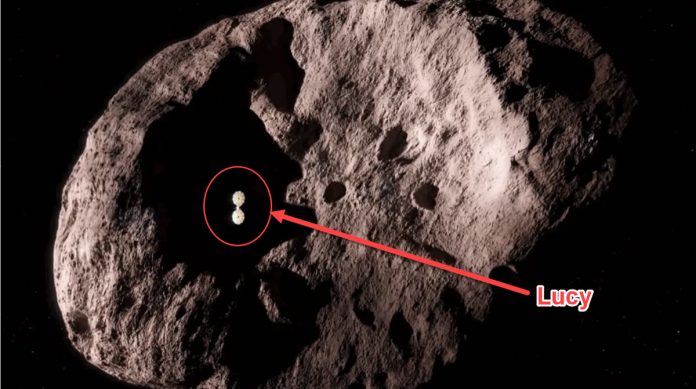 NASA is about to launch the Lucy space probe. For the first time, it will examine asteroids in the orbit of Jupiter, or the so-called Trojans. This would help explain the origin of our planets.

Trojans fly back and forth in the orbit of Jupiter. (screenshot: t3n/NASA)

Trojans, which researchers originally thought only occurred in the orbit of Jupiter, are the remains of enormous groups of rocks and ice masses that formed on the planets more than four billion years ago. This is exactly why they are so interested in research.

Trojans are supposed to provide information about the origin of planets

Science assumes that analysis of fossil rocks can answer key questions about the formation of planets in our solar system. NASA calls ancient asteroids “time capsules from the birth of our solar system.”

“The materials that Jupiter and Saturn are made of are now trapped in these places,” said Hal Levison, a NASA planetary researcher and director of the Lucy mission.

This is where the Lucy spacecraft comes in

For this reason, the US Space Agency wants to send a space probe to the two asteroid belts for the first time to examine seven selected representatives of Jupiter’s Trojans. The mission called Lucy It is scheduled to run for twelve years and is scheduled to begin on October 16, 2021 with the launch of the probe aboard a United Launch Alliance Atlas V rocket from NASA’s Cape Canaveral base in Florida, USA. Via the online channel on TV The launch, currently scheduled for 11:34 a.m. CST, will be broadcast live.

The spacecraft will use conventional chemical propulsion. In order to save fuel, it will focus entirely on its actual mission, thus skipping other points of interest on its way. Equipped with a highly sensitive antenna to communicate with the Earth, high-tech cameras for color and black and white recordings, an infrared spectrometer and a thermometer, the probe will record all the physical characteristics of the Trojans.

Because Lucy relies on solar energy for her mission, but travels too far from the sun, she has solar systems large enough to cover a five-story building. These solar systems are the weaknesses of the project.

20 critical minutes that make the difference between success and failure

Instead of the known seven minutes of fear, as is known when landing Mars, Lucy will have 20 minutes of fear. This is the time it will take for solar systems to fully unfold after starting. The task can only succeed if it succeeds without errors.

There is a lot of excitement at NASA. After all, “no other space mission in history has been launched to so many different targets in independent orbits around our sun,” according to the agency. Lucy will “show us for the first time the diversity of the original bodies from which the planets arose.”