Persia Digest
Home World Near the resorts, tourists flee from the Aegean to the Mediterranean 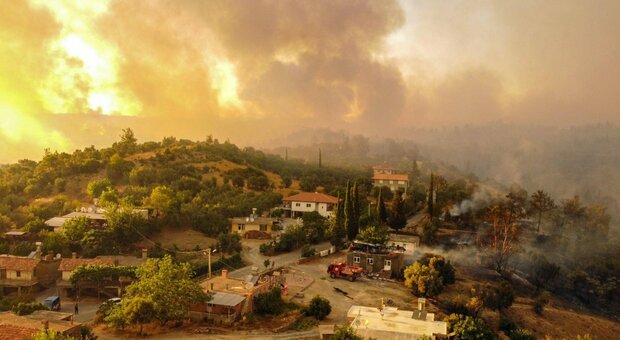 The Aegean coast is a long tongue of fire in Turkey The South: For days, tourist areas and resorts have been severely tested by fires that stretched for several kilometers, difficult to contain despite huge rescue operations, due to winds but above all due to record temperatures that in some areas of the country have reached their peak. It hasn’t occurred in decades, or even four times more than was ever recorded, according to some data cited by the Guardian. So far, there are six dead – including two forest rangers – and at least 200 injured, while 10 fires are still active, and three in Antalya Province.

Thousands of tourists were evacuated From resort areas, in some cases on boats. And so after the hot emergency in North America, the floods in Europe, the fires in Siberia, and the scenes of devastation in Turkey lead us to believe we can no longer speak of signs but of a climate emergency now overt. In Turkey, fear has been escalating for days: in fact, since Thursday, the escalation began, after fires literally surrounded some tourist resorts on the Aegean Sea, burning hectares after hectares in areas AntalyaAnd Bodrum, Mugla, and this despite huge emergency vehicles scattered in a race against time to save what can be saved.

Thousands of firefighters at workWhereas in the cities and villages the residents are afraid to lose everything, literally: land, homes, livestock. Fire engulfs him. “All I have now is ashes – all this is not normal. It is like hell. Firefighters across the country have intervened to put out about 50 fires. Dozens of hospitalizations due to smoke poisoning have been arranged. In Meanwhile, disturbing images spread on the web, led by the hashtag #PrayForTurkey on Twitter, along with maps of active fires in the country.

Turkey casts doubt on the PKK

The matter was investigated for malice, and the Kurdistan Workers’ Party, the Kurdish separatist movement, was also questioned on suspicion of acts intended to create chaos. But no evidence has been provided to confirm this hypothesis. Black on white are the data of climate experts, who have long predicted unusual temperatures in Mediterranean countries, according to the latest report from the United Nations Intergovernmental Panel on Climate Change. And at the moment there is no relief in sight: the Turkish Meteorological Office does not report any improvements for the next week, on the contrary, in Ankara and in several other regions it can reach 12 degrees above the seasonal average ..

I am deeply saddened by the forest fires in Turkey.
Pray for the victims and God save people, beasts and trees.

The battle for Biden’s right to vote against the Republican wall...