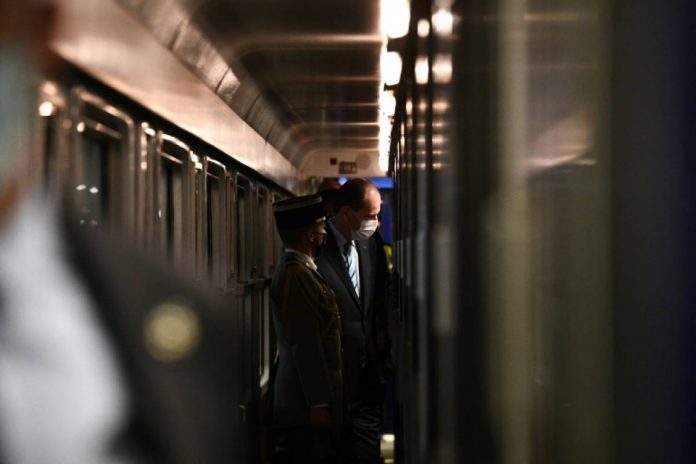 Prime Minister Jean Castex visits the night train between Paris and Nice at the Austerlitz station in Paris on May 20, 2021 (AFP / Anne Christine Boujolat)

“Tonight we are reopening the things we might have sacrificed very quickly,” Jean Castex fired while riding the Paris-Nice night train, which departed Thursday evening after more than three years of hiatus.

Craving trains from Toulouse Paris nightlife in his youth, the Prime Minister took advantage of the installation to go to Nice in a bed.

Departing on time from Gare d’Austerlitz at 8:52 PM, the train should arrive at 9:11 AM on Friday on Côte d’Azur. That’s six hours longer than the high-speed train.

With this night flight of 1,088 kilometers on its agenda, Jean Castex wants to highlight the “rapid realization of the French stimulus plan”, which has allocated 5.3 billion to the rail sector, including 100 million for night trains.

The government also wants to relaunch “Paris-Tarbes” and “Paris-Vienne” at the end of the year.

“This first night train is a powerful symbol, indicating the revival of this mode of transportation that some have considered archaic,” said SNCF CEO Jean-Pierre Farando, before boarding the train as well.

The night train, “It’s also the comeback + slow life +, we take our time and find a taste for travel, it’s like a short cruise,” while “the health crisis has also accelerated climate awareness,” Mr. Farando continued.

Intercités Paris-Nice, whose operations were discontinued in December 2017 due to lack of profitability, will connect Paris-Austerlitz and Nice-Ville every day and in both directions, with six stations including Marseille, Toulon and Cannes.

The first Paris-Nice Hotel was full but not crowded: due to the pandemic, sleeping quarters are limited to four passengers instead of six in second class. SNCF said: “In position + head to tail + in order to maximize distances between travelers.”

In the near future, it will depart Paris-Nice with seven cars that usually go to Briançon (Hautes-Alpes), a currently closed link for work, and cars for Modan.

If refurbished, the compartments are in their own juice, with sockets in the hallway, not the wifi bar.

“It’s exactly the same comfort that I had when I took the train in the 1970s to go to Berlin,” says Christian Decwins of the National Transport Users Association. If she welcomes the resumption of this journey, which is “another art of travel”, she also wants SNCF to develop Intercités de jour, to connect the regions.

Nicholas Furian and Alice Pilon, from the group Yes to the Night Train, do not hide their happiness. “It is ideal for traveling in Europe. There are a lot of young people who are excited not to travel by plane anymore,” the two confirm, Marseille.

After Paris-Nice was discontinued at the end of 2017, and the prestigious Blue Train heir launched in 1886, a call to express interest in finding a buyer was launched, to no avail.

The relaunched link may be the first in a new series of overnight lines.

Emmanuel Macron caused the surprise in July 2020 by announcing a “policy to promote and revitalize night trains”.

There are no longer – with the exception of epidemic- or business-related stops – more than two overnight train lines in France, from Paris to Briançon, and from Paris to Rodez, Serbert and Latour de Carroll (Pyrenees Orientales). The cars of these remaining lines must be completely renewed by 2023, for 44 million euros.

Night links may follow Dijon-Marseille, Bordeaux-Marseille, Paris-Toulouse and Tours Lyon one day, according to a copy of a government report leaked Tuesday in the Mobilettre newsletter.

The rapporteurs take an example of the Austrian company ÖBB’s success in creating a true network (Vienna-Amsterdam or Munich-Rome, among others).

The Ministry of Transport announced this evening, Thursday, that this report on “developing new regional scale train lines” had been sent to Parliament.