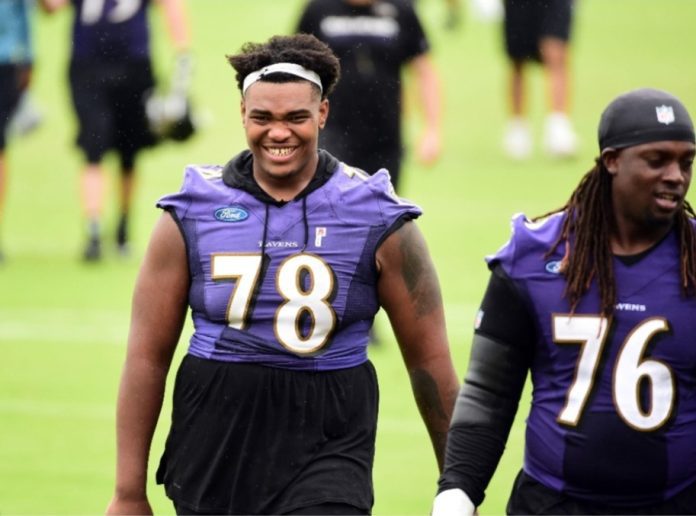 Orlando Brown Jr. has been plying his trade in the NFL with the Kansas City Chiefs since 2021, and the two parties have been in talks about a long-term extension to his deal for a while. However, the deadline for that to be concluded was the 15th of July, and because the date has passed, Brown Jr. will now play on the franchise tag in 2022.

It’s said that both Brown Jr., 26, his representatives, and the Chiefs were all eager to get a  deal over the line and for the offensive tackle to continue his career with the franchise. But, a disagreement over the financial package led to a collapse in talks, with neither side willing to budge to meet the 15th of July deadline.

According to reports, the Brown Jr. camp expressed a desire to secure a financial package of over $25 million in annual compensation to reset the offensive tackle market. And while the Chiefs were willing to put forward a six-year contract which included the highest signing bonus and annual percentage yield, there was no budging from the player’s side, even with the deadline fast approaching.

In 2021, Kansas City pulled off what many would describe as a blockbuster deal to prise Brown Jr. away from the Baltimore Ravens. An in-depth analysis of the NFL shows how effective the Maryland-born star is at offensive tackle and why the Chiefs have been willing to push the boat out in recent talks to extend his contract. But, the Brown Jr. camp suggests that security and structure were the two major issues, which is why no agreement was reached in the end.

See also  United States: Debris rain from a complex plane over the city of Denver | World | News | The sun

The 2022 NFL campaign looks like this for Brown Jr. He will rake in over $16.5 million per his deal after being tagged. And, this may not be the end of the situation, as it could be the same again next season if an agreement between all parties still cannot be reached in time. But it’s worth noting that during the next twelve months, it may cost financially more to secure him, and he will be a year older too.

If an agreement had been inked before the 15th of July as everyone hoped, believe it or not, it would have made Brown Jr. better paid per annum than San Francisco 49ers star Trent Williams, one of the top players in the NFL right now. But instead, it’s now a case of potentially being fine with the situation for this season because the contract costs less than £17 million.

However, how the Chiefs have allocated financial resources now may end up costing them next season. And, you’ve got to point out that Brown Jr. and his people have taken a big risk by not agreeing to take the money on the table that was ready to go. So, there are certainly elements of risk on both sides. But who comes out on top, and whether both get what they’re looking for, remains to be seen.

Information is intimate. Actress Charlotte Valandre has died at the age of 53

Small final? Is there a game for third place in...